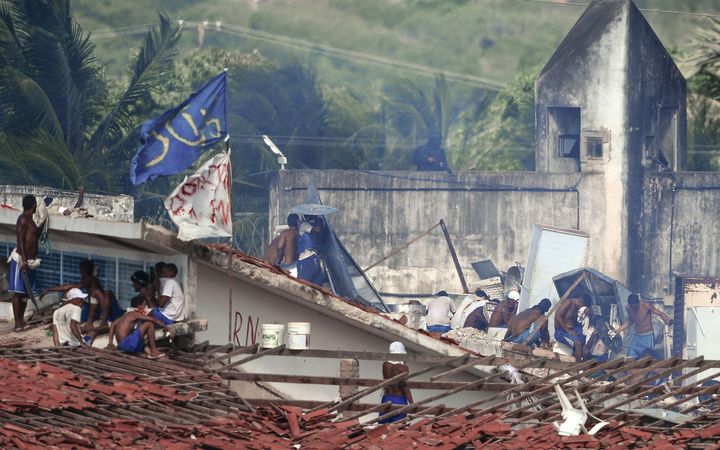 Police fired tear gas grenades at the inmates gathering on the roofs of the Alcacuz Penitentiary during recent riots. Photo: AFP

The discovery comes just days after at least 26 inmates were killed in a riot at the jail in the city of Natal.

Officials said inmates at Alcacuz jail had taken advantage of heavy rains to dig the tunnels in the softened ground.

But they insisted that none of them had been finished and that no prisoner had managed to escape through them.

Violence erupted at Alcacuz on 14 January when rival criminal gangs First Command of the Capital (PCC) and the Crime Union clashed.

At least 26 people were killed in the 14-hour riot.

There have been several outbreaks of violence at the jail since that day.

Military police are erecting a barrier made from 12m-high containers between the prison wings occupied by the rival gangs to keep them apart.

Officials said the temporary barricade would eventually be replaced by a cement wall measuring about 90m in length.

Alcacuz prison was designed to hold 620 inmates, but held more than 1,000 before the riot erupted.

The authorities have since transferred 220 prisoners to other prisons.

Brazil has seen a wave of prison violence since the beginning of the year with more than 120 inmates killed.

The spike in violence is blamed on a breakdown of a truce between two of the country's most powerful gangs.