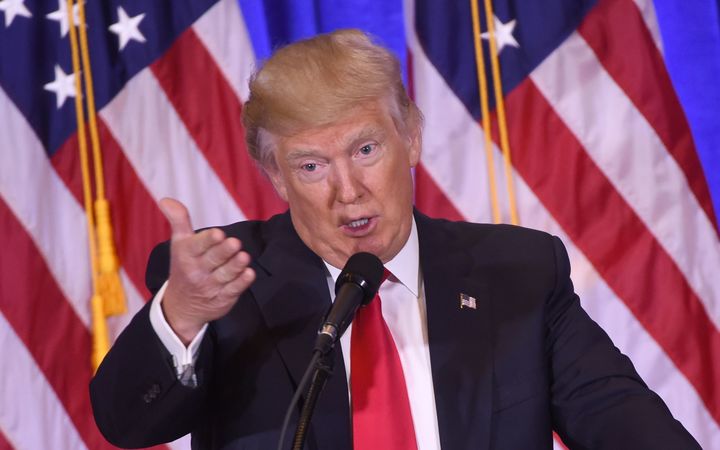 He said spontaneity was not in the interests of national security.

Mr Trump is known for regularly making broad pronouncements on issues of national importance on his Twitter feed.

"I don't think he has a full appreciation of Russian capabilities, Russia's intentions and actions that they are undertaking in many parts of the world and that's what the obligation and responsibility intelligence community is," said John Brennan.

"I think Mr Trump has to understand that absolving Russia of various actions that it's taken in the past number of years is a road that he, I think, needs to be very, very careful about moving down."

Mr Brennan's remarks, in an interview for Fox News Sunday, come a week after the release of a US intelligence report which said Russian President Vladimir Putin had likely attempted to influence the election.

Mr Trump is considered to have underplayed for months the conclusions of the intelligence community that Moscow hacked Democratic candidate Hillary Clinton's campaign. He only accepted them at a news conference on Wednesday.

Meanwhile, both the Kremlin and Mr Trump's team have denied reports in the British Newspaper the Sunday Times that the two sides were planning a summit between Mr Trump and Mr Putin in the Icelandic capital Reykjavik.

Reykjavik was the venue for a summit in 1986 - near the end of the Cold War - between Ronald Reagan and Mikhail Gorbachev, the then US and Soviet leaders.

Mr Brennan said "talking and tweeting" was not an option for Mr Trump, who takes office next Friday.

"Spontaneity is not something that protects national security interests and so therefore when he speaks or when he reacts, just make sure he understands that the implications and impact on the United States could be profound," he said.

"It's more than just about Mr Trump. It's about the United States of America."

The CIA director also took Mr Trump to task for accusing the intelligence services of leaking an unverified dossier which suggests Russian security officials have compromising material on him, which could make him vulnerable to blackmail.

"What I do find outrageous is equating the intelligence community with Nazi Germany," he said, referring to a tweet by Mr Trump last Wednesday.

"There is no basis for Mr Trump to point fingers at the intelligence community for leaking information that was already available publicly."

The president-elect said the claims were "fake news" and "phoney stuff".

Russia also denies the existence of the dossier and said allegations that it ran a hacking campaign to influence the elections were "reminiscent of a witch-hunt".

The unverified report, apparently compiled by a private intelligence firm, claims Russia has gathered compromising data about Mr Trump. Here is a summary of what we know so far.

Who wrote the report and why?

It has been widely attributed to Christopher Steele, a retired British intelligence officer.

Mr Steele, who runs a London-based intelligence firm, was reportedly hired by anti-Trump Republicans to investigate Mr Trump's ties to Russia during the battle for the party's presidential nomination. In the general election campaign the research was funded by an anonymous Democratic donor.

Since Mr Steele has been in hiding since the report surfaced on Tuesday, there is no confirmation that he is the author.

What does the report say?

It consists of a series of memos dated from June to December, and said to be based on information from members of the Russian intelligence community.

It claims that Russian officials have cultivated Mr Trump for at least five years to encourage splits within the Western alliance, and shared intelligence information with him.

Most startlingly, it alleges that Russia has managed to compromise Mr Trump and is in a position to blackmail him. It says Russia's FSB agency has footage of the president-elect using prostitutes at the Ritz-Carlton hotel in Moscow.

How did the public learn of the existence of the report?

CNN reported its existence on 10 January, and the Buzzfeed website published it in full.

How credible is the information it contains?

Since the report was published, Mr Trump has denounced it as "false and fictitious" and said it contained "made up, phony facts". Russian officials have dismissed it as "pulp fiction".

All major media outlets have stressed that the report's allegations are unsubstantiated. Several, including the BBC, had knowledge of the claims before the election, but were unable to verify them and therefore did not publish stories.

Newsweek said it "contains lots of Kremlin-related gossip" and pointed to factual errors and the misspelling of Russian names.

However, the reports were considered credible enough by the US intelligence community for a two-page summary to be given to both President Barack Obama and Mr Trump in early January.

US Director of National Intelligence James Clapper has merely said the claims were still being assessed. He also strongly denied suggestions by Mr Trump that US intelligence agencies had been involved in leaking the report.

Mr Lewis - the last surviving speaker from the 1963 March on Washington led by Martin Luther King - said Mr Trump would not be a legitimate president.

Mr Trump has responded by saying Mr Lewis is "all talk" and should focus on his constituents.

Civil rights activists have begun a week of protests leading up to the inauguration on 20 January.