An Israeli soldier filmed shooting dead a wounded Palestinian attacker after he had been disarmed of a knife has been convicted of manslaughter. 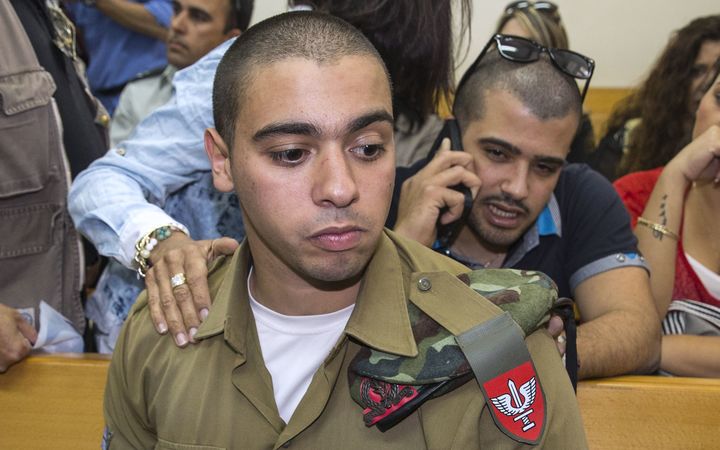 Israeli soldier Elor Azaria has been convicted of manslaughter after he shot dead a wounded Palestinian assailant. Photo: AFP

Sgt Elor Azaria, 20, shot Abdul Fatah al-Sharif, 21, in the head while he was lying immobile on a road.

The incident happened in Hebron in the occupied West Bank last March, after another soldier was stabbed.

Sgt Azaria said he thought Sharif might have an explosive vest, but prosecutors said his motive was revenge.

There have been rallies to support the soldier and some senior politicians backed Sgt Azaria. However, top military figures were quick to say that his actions did not reflect the values of the Israel Defence Forces (IDF).

In the incident on 24 March, Sharif and another 21-year-old Palestinian, Ramzi Aziz al-Qasrawi, stabbed and wounded an Israeli soldier before troops opened fire on them, wounding Sharif and killing Qasrawi.

Footage of the scene several minutes later, filmed by a Palestinian and released by the Israeli human rights group B'Tselem, shows Sharif alive.

A soldier, identified as Sgt Azaria, is then seen cocking his rifle and fatally shooting Sharif from several metres away.

In their indictment, prosecutors said Sgt Azaria "violated the rules of engagement without operational justification as the terrorist was lying on the ground wounded and represented no immediate threat for the accused or others who were present".

Delivering the verdict on Wednesday, the panel of three military judges rejected Sgt Azaria's defence that he shot Sharif because he continued to pose a threat.

He had told the court that he believed there might be a suicide belt under the Palestinian's jacket.

The judges, who took two-and-a-half hours to deliver their verdict, noted that Sgt Azaria's commanders had testified that he did not mention the same concerns when they questioned him immediately after the shooting incident.

The judges also said there was no dispute regarding the veracity of the statements made by another soldier, who testified to military investigators that Sgt Azaria had told him during the incident: "They stabbed my friend and tried to kill him - he deserves to die."

Sgt Azaria told the court that he did not recall having any such conversation, but the head of the judging panel, Col Maya Heller, described him as an "unreliable witness".

"His motive for shooting was that he felt the terrorist deserved to die," she said.

Prosecutor Lt Col Nadav Weissman said: "This is not a happy day for us. We would have preferred that this didn't happen. But the deed was done, and the offence was severe."

A spokesman for Sgt Azaria's family said evidence proving his innocence had been ignored. "It was like the court was detached from the fact that this was the area of an attack," he said.

The soldier's mother, Oshra, shouted at the judges: "You should be ashamed of yourselves." 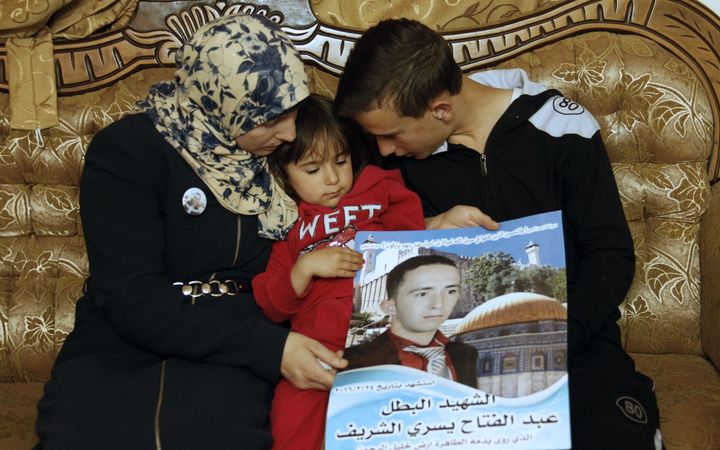 The mother and siblings of Palestinian Abdul Fatah al-Sharif, who was shot dead by Israeli soldier Elor Azaria, hold a poster breaing his portrait in the Israeli occupied West Bank city of Hebron. Photo: AFP

The defence team has said it will appeal against the verdict. Sentencing is expected in the next few weeks. Manslaughter in Israel carries a maximum 20-year term.

Sharif's father Yusri was quoted as saying Sgt Azaria deserved a life sentence. Sharif's uncle, Fathi, told Haaretz that the decision to try him for manslaughter rather than murder was "a perversion of justice and of the court".

But a right-wing member of the governing coalition, Naftali Bennett, has called for an immediate pardon for the soldier.

The final decision lies with President Reuven Rivlin, who said in a statement that he would only deal with the issue once the judicial process had run its course.

Defence Minister Avigdor Lieberman, who expressed support for Sgt Azaria before taking office in May, said the verdict was "difficult" and that the defence establishment would "do everything it can to assist the soldier and his family".

But he also called on the public to respect the court's decision.

Sari Bashi, Israel advocacy director at Human Rights Watch, described the verdict as "a positive step toward reining in excessive use of force by Israeli soldiers against Palestinians".

The shooting happened during a wave of knife, gun and vehicle ramming attacks by Palestinians or Israeli Arabs in Israel and the West Bank that has killed at least 42 people since September 2015, according to the Israeli authorities.

Human Rights Watch said on Monday that video footage or witness accounts raised serious questions about many of the more than 150 instances in which Israeli forces have fatally shot Palestinians during attacks or attempted attacks on Israelis.