A New Zealand-led peace initiative at the United Nations is being strongly criticised by both Palestinians and Israelis.

The Palestinians say it lacks substance while the Israelis say it could become a distraction from the real needs of the Middle East. 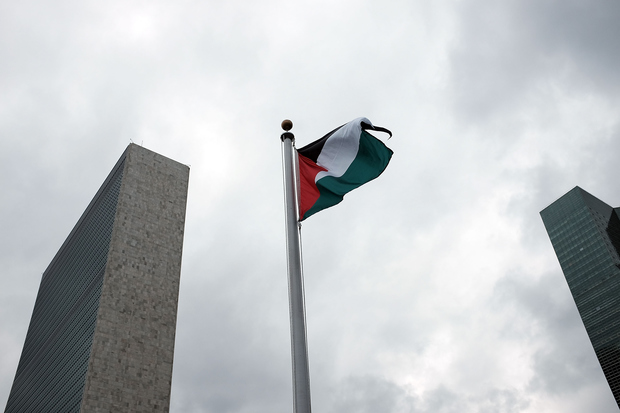 The Palestinian flag flies for the first time at the United Nations headquarters. Photo: AFP

In a draft Security Council resolution, New Zealand has called for Israel to halt its settlements in the occupied territories and Palestinians to stop taking cases to the International Criminal Court (ICC).

Issat Abdulhadi, head of the General Delegation of Palestine to New Zealand, Australia and the Pacific, said the Palestinians would not stop taking cases to the ICC.

The New Zealand draft proposal also called for both sides to refrain from provocative gestures and not to demonise each other with hostile rhetoric.

Mr Abdulhadi welcomed the draft resolution but he told RNZ he still has doubts about it.

"It still does not have an identity, we need more substance in the resolution."

If it was a short-term measure, then the New Zealand resolution should deal with issues such as what he called "Israeli provocations" in Jerusalem, he said.

But if the New Zealand initiative was long term, it should look at issues such as the Israeli occupation of the West Bank and the terms of reference for a renewed peace process.

"In this instance, the contents of the resolution lack a little bit of substance," he said. "It talks about only two issues, that we stop our claims to the ICC and that that Israel stop settlements."

Israel's ambassador to New Zealand has also faulted the proposal.

Josef Livne said New Zealand had good intentions, but its actions might only serve as a distraction from the real issue.

"The only way to see some progress and eventual agreement is direct negotiations between the Palestinians and ourselves.

"We have seen that over three years our Palestinian counterparts have been trying to avoid coming to the table and negotiating with us.

"We fear that any initiative in the international arena in the Security Council will give them an added reason not to negotiate with the Israelis because all kinds of ideas are floating around."

Once resolutions started in the United Nations, debates and amendments could easily distort their orginal intention and become unworkable, he said.

Both men said the New Zealand government was aware of their thoughts.

All 15 members of the Security Council are being briefed on the New Zealand proposal, but so far only Russia has expressed support for it to proceed further.

The US position is critical, but is unclear at this stage.

However, in a recent speech, US Secretary of State John Kerry spoke strongly in favour of a two-state solution, which is what the New Zealand draft also calls for.

If the draft is voted on, it will be the first time the Security Council has voted on the Middle East in six years.

The government has resolved to make no public comment while the matter is being considered by other nations, he said.