The fate of a New Zealand-led attempt to bring peace to the Middle East is expected to become apparent in the next few days. 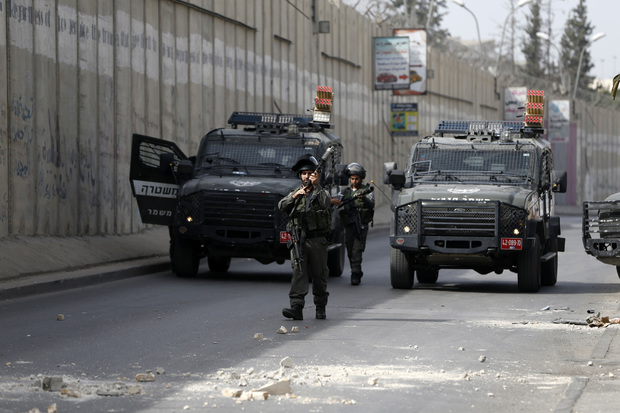 Israeli borderguards walk in front of military vehicles during clashes last month with Palestinian youth in the Palestinian village of al-Ram, in the Israeli occupied West Bank. Photo: AFP

So far, Russia has expressed support, Israel has expressed opposition and the Palestinian Authority says it falls short of what it wants.

The view of the United States is unknown.

The matter arose after New Zealand used its two year term on the Security Council to try to kick-start UN involvement after a six year hiatus.

New Zealand produced a draft proposal asking Israel to halt settlements in the occupied territories and the Palestinians to stop taking cases to the International Criminal Court.

The draft also called for both sides to refrain from provocative gestures and not to demonise each other with hostile rhetoric.

And it said a two state solution achieved by negotiation with both sides was the only way to peace.

Mr McCully has remained silent since the draft proposal was unveiled in New York, but has indicated he might reveal more details later today or tomorrow.

Mr McCully might also brief cabinet today but the draft is not formally on the agenda and will not be voted on.

All 15 members of the Security Council are expected to be fully up to date with the proposal in the next few days but it is still unclear if it will be voted on or be changed or lapse.

The Israeli newspaper Haaretz said Russia was keen on what New Zealand had come up with.

It quotes its UN Ambassador Vitaly Churkin as saying the Security Council should seriously look at the New Zealand proposal.

The newspaper said Israel's UN Ambassador Danny Danon dismissed the draft as being destructive, not constructive, saying the only way to achieve peace was through direct talks between the parties.

The paper added Palestinian Ambassador Riyad Mansour supported New Zealand's efforts but said the resolution did not address what he called the need of Palestinian civilians for protection.

The United States' position is critical and it is unclear at this stage.

But in a recent speech, US Secretary of State John Kerry spoke strongly in favour of a two state solution which is what the New Zealand draft also calls for.

If the draft gets voted on, it will be the first time the Security Council has voted on the Middle East in six years.