No evacuation convoys have left Aleppo for hours, raising concern for thousands of people still believed to be trapped in the rebel enclave in the Syrian city. 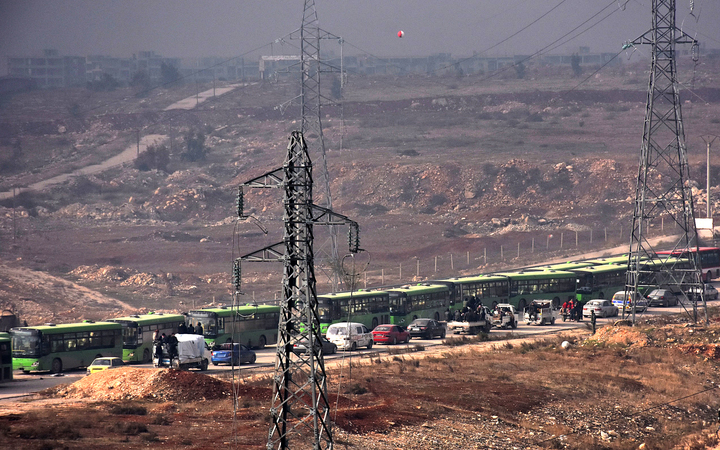 Buses are seen during an evacuation operation of Syrian rebel fighters and civilians from a opposition-held area of Aleppo towards rebel-held territory. Photo: AFP

At least 6000 civilians and rebels are said to have left Aleppo, Syria's largest city, since Thursday after the government recaptured most of the city.

But the UN believed about 50,000 people were still trapped in Aleppo. Those being evacuated were taken in convoys to rebel-held parts of Idlib.

WHO official Elizabeth Hoff said there were still large numbers of women, and children under five, who needed to get out.

"They have been collecting themselves on the points where the buses and the ambulances were waiting for them," she said.

"But now with the operation aborted they had to go back to their houses and this a great concern to us because we know that they are desperate to get out."

The UN Secretary General, Ban Ki-moon, used what is probably his last press conference in the role to decry the international response - or lack thereof - to the Syrian crisis.

"The carnage in Syria remains a gaping hole in the global conscience," he said.

"Aleppo is now a synonym for hell.

"As I told the Security Council three days ago, we have collectively failed the people of Syria."

The evacuations were suspended after pro-Syrian government militias demanded that a reciprocal deal be carried out for the wounded from two villages besieged by rebels. 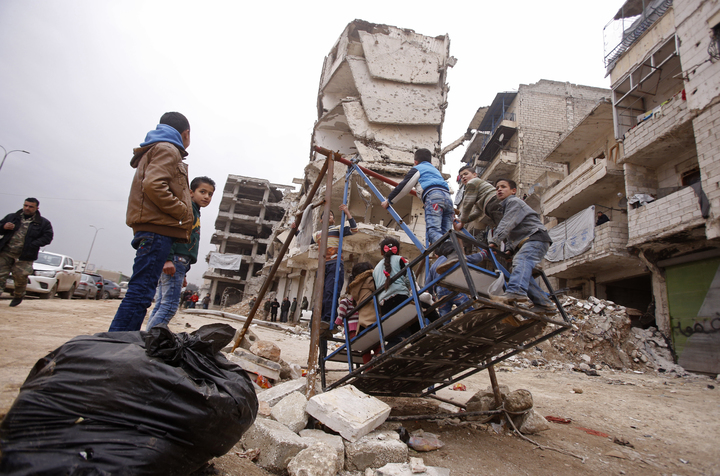 Syrian children play on a swing in the government-held part of Aleppo's Salaheddin neighbourhood on Friday local time after the government suspended evacuations from rebel-held parts of the city. Photo: AFP

Russia, a key ally of the Syrian government on the ground, said the evacuation was complete, with all rebels and their families having been evacuated. It put the number at more than 9500.

But Turkey denied that, arguing many people still wanted to get out.

Abdul Kafi Alhamdo, an English teacher and activist in Aleppo, tweeted about his experience when he tried to leave the city.

He said people had been waiting in "freezing" conditions since the early morning, for buses which never arrived.

"It seems that the international community decided to let us to our destiny," he tweeted.

Speaking in Ankara, Turkish Foreign Minister Mevlut Cavusoglu said consultations were under way with Russia and Iran, another key ally of the Syrian government, as well as "elements on the ground". 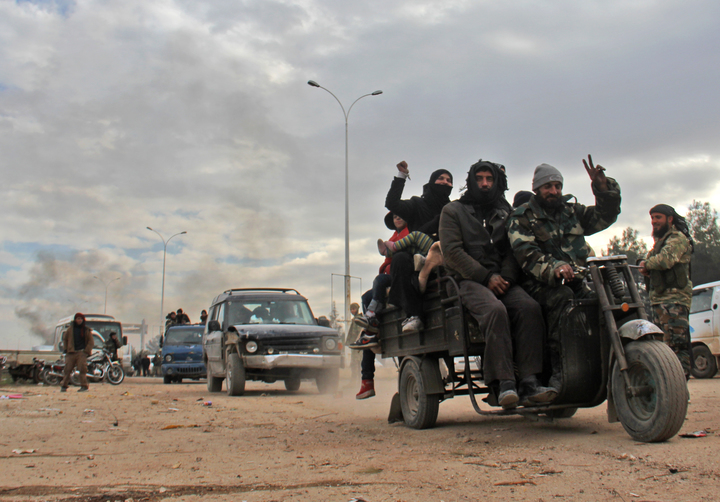 Reports suggested the biggest rebel group in Idlib, the Jabhat Fateh al-Sham jihadists formerly known as the Nusra Front, have now agreed to allow injured people to leave the towns, Foua and Kefraya, which are home to some 20,000 people.

Rebel sources said the evacuations there were due to begin shortly.

Syrian state media also accused rebels in Aleppo of trying to smuggle captives and heavy weapons out with them as they left besieged enclaves in the city.

Government forces have captured almost all of the rebel-held territory in eastern Aleppo, with the help of Russian air strikes.

A Russian military officer has said more than 3400 "moderate opposition fighters" laid down their arms in surrender in east Aleppo - and 350 of them were being investigated.

"During the liberation of the eastern districts of Aleppo, 3406 moderate opposition fighters have voluntarily surrendered, stopped resistance and laid down their arms - 3056 of them were granted amnesty, and the rest are being vetted," Lt-Gen Sergei Rudskoi said.

US President Barack Obama said on Friday the world was "united in horror" at the fighting and that President Bashar al-Assad and his allies were responsible for atrocities including reported massacres of civilians.

"Responsibility for this brutality lies in one place alone - with the Assad regime and its allies Russia and Iran. And this blood and these atrocities are on their hands," Mr Obama said at a White House news conference.