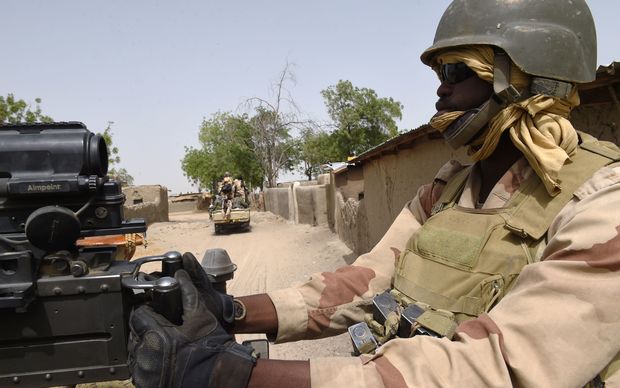 Nigerian forces have been clashing with Boko Haram since about 2009. Photo: AFP

A local official said the schoolgirls launched a coordinated attack on a crowded market in the northeastern Nigerian town of Madagali on Friday.

The bombings bore the hallmark of Islamist militant group Boko Haram, which has been waging an insurgency to set up a state adhering to a strict interpretation of Muslim laws in the northeast.

There was no immediate claim of responsibility.

Major Badare Akintoye, a spokesman for an army unit in the nearby town of Mubi, said the attacks had been carried out simultaneously by two schoolgirls.

Boko Haram has frequently targeted crowded areas such as markets, places of worship and refugee camps in suicide bomb attacks across northeast Nigeria and in neighbouring Cameroon and Niger.

The jihadist group has killed some 15,000 people and forced more than two million people to flee their homes.

Nigeria's army has pushed the militant group back to its stronghold in the vast Sambisa forest in the past few months. While Friday's market attack highlighted Boko Haram's ability to mount strike civilans in urban areas, the frequency at which the group does so has fallen.