Syrian rebels have called for a five-day truce to allow the evacuation of civilians, after withdrawing from their last strongholds in Aleppo's old city.

They said civilians were in great danger and they would support any initiative to ease their suffering. 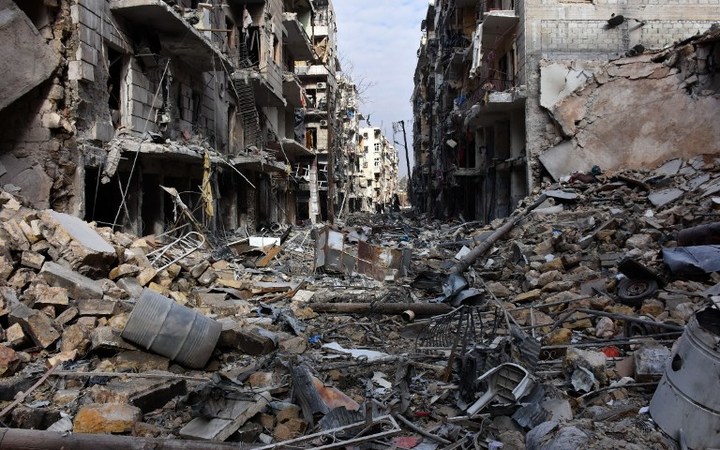 Food supplies are exhausted and there are no functioning hospitals in rebel-held districts of Aleppo after months of heavy bombardment. Photo: AFP

The US and five Western powers also put out a joint statement calling for an immediate ceasefire to allow aid into rebel-held areas.

The Syrian government has ruled out any further ceasefires.

Its ally, Russia, has called all remaining rebels in eastern Aleppo "terrorists".

In a separate development, Syrian state news agency Sana reported that several Israeli missiles struck the Mazzeh military air base outside the capital Damascus overnight, causing a fire but no casualties.

Tens of thousands of civilians are still trapped in rebel-held districts of Aleppo, Syria's second city.

One resident said those districts were now heavily crowded and there were fears that people faced being captured, detained and tortured to death.

"I know people who literally did nothing, they just kept doing nothing for four, five years, they just wanted to stay in their homes and now they are being arrested by the regime," Wissam, a teacher and activist said.

Food supplies are exhausted and there are no functioning hospitals after months of heavy bombardment.

The BBC's Lyse Doucet in Aleppo said officials there were preparing for another exodus, as families tried to flee under fire in an extremely dire situation.

State media confirmed the military had taken over the whole of the old city.

Government forces now control about 75 percent of eastern Aleppo, held by the rebels for the past four years.

The rebels, who had been left with just a spit of land north-east of the citadel after recent government advances, abandoned it by Wednesday morning, retreating to territory they still hold further south.

"Civilians should be either protected or evacuated to a safe area where they will not be under the mercy of [Syrian President Bashar al-] Assad and his henchmen," said a statement by the rebel Aleppo Leadership Council.

The US, Britain, Germany, Italy, France and Canada jointly called for an immediate ceasefire on Wednesday, "to allow the United Nations to get humanitarian assistance to people in eastern Aleppo".

They also condemned the Syrian government and its main backer Russia for "their obstruction of humanitarian aid", accusing them of targeting hospitals and schools "in an attempt to wear people down".

The Syrian government has ruled out any further truces in Aleppo, and Russia and China on Monday vetoed a UN Security Council resolution on a week-long ceasefire.

French President Francois Hollande responded to the veto by accusing Russia of "systematic obstruction" which "bolsters the regime of Bashar al-Assad in its destructive drive which is harming the defenceless civilian population".

In a conference call on Wednesday, Kremlin spokesman Dmitry Peskov described all the remaining rebels in eastern Aleppo as "terrorists", saying that they had united around the jihadist group formerly known as al-Nusra Front.

Meanwhile, the Russian defence ministry reported that a Russian military adviser in Syria had been killed by rebel artillery fire.

Col Ruslan Galitsky died of his wounds several days after the attack, on a residential area of government-held western Aleppo, it said.