Analysis - US President-elect Donald Trump has already been hit by several scandals, but absorbs the blows by simply changing the conversation. How does he do it? 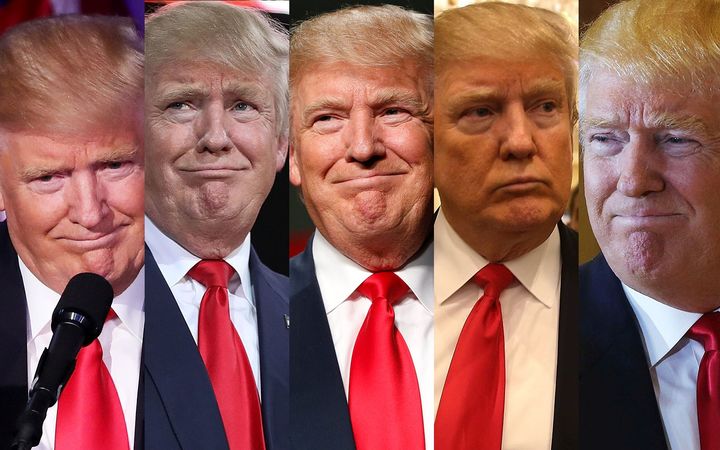 Donald Trump's team of spokespeople and strategists had their work cut out during the 2016 campaign.

Mr Trump's history presented a possible public-relations disaster even before he decided to run.

Further scandals then emerged during the race.

But Mr Trump and his team often seemed to absorb the blows by simply changing the conversation - as we have seen again at the weekend.

It may not always be deliberate, and we may never know the real intentions at play.

But here is how some of the biggest Trump controversies have played out.

In 2005, Mr Trump announced he was creating a university to teach students his business secrets as a property tycoon.

Students paid as much as $US35,000 for the seminars and classes, but some former students filed a class-action suit, claiming they had lost thousands of dollars through the university's "high-pressure" sales tactics.

Two separate cases were brought against him in California, and another suit was filed by the New York attorney general.

On Friday, it was announced that Mr Trump had settled the three claims for a total of $US25m, saying he did not have the time to fight the allegations while setting up a transition team.

Hours after the settlement was announced, his vice-president-elect, Mike Pence, attended a performance of the hit Broadway show Hamilton.

Mr Pence was booed entering the theatre and addressed by the actors on stage after the show who said they were "alarmed and anxious" the new administration "will not protect us".

The Theater must always be a safe and special place.The cast of Hamilton was very rude last night to a very good man, Mike Pence. Apologize!

Mr Trump took to Twitter demanding the cast of Hamilton apologise for their "rude behaviour". A Twitter war ensued between Trump supporters and Hamilton supporters, some calling out performers with #BoycottHamilton and others lashing out at Mr Pence with #NameAPenceMusical.

Mr Trump kept up the attacks today, with another tweet calling for an apology:

The cast and producers of Hamilton, which I hear is highly overrated, should immediately apologize to Mike Pence for their terrible behavior

Headlines focusing on Mr Trump's settlement were soon replaced with news of Mr Pence's theatre experience. And Mr Trump demanded an apology for what he called "harassment" of his running mate.

The Trump University settlement stayed a one-day story only, and follow-up articles have been few and far between.

In the weeks leading up to the election, several women came forward to accuse Mr Trump of groping them without consent in the past, allegations he denies.

On 3 October, an investigation released by the Associated Press news agency quoted producers on Mr Trump's hit reality show, The Apprentice, as saying the billionaire was lewd and sexist.

Just four days later, the allegations of sexual misconduct against Mr Trump came to a head when the Washington Post released a tape of him boasting about physically pushing himself onto women.

Mr Trump did apologise for the tape, saying in a statement "these words don't reflect who I am". 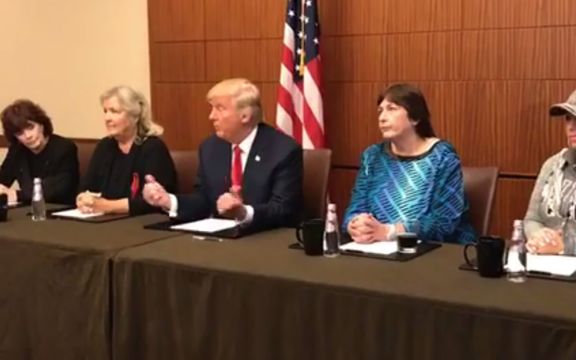 But with pressure mounting and the second presidential debate just days away, Mr Trump gathered together a small group of women who had accused former President Bill Clinton of sexual assault and rape.

Hours before the debate, Mr Trump appeared sitting at a table with the women, who in his words had "asked to be there".

Juanita Broaddrick, who first accused Mr Clinton of raping her in 1999 after recanting an earlier affidavit, said at the news conference: "Mr Trump may have said some bad words, but Bill Clinton raped me and Hillary Clinton threatened me. I don't think there is any comparison."

No criminal charges have been brought against Mr Clinton in any allegations of sexual assault.

In the days following the debate, Mr Trump managed to create significant interest in the allegations against Mr Clinton, throwing the attention on to the past of his rival and her husband.

The polls after Mr Trump's second debate reflected a dip in his popularity, but under two weeks later at the final presidential debate, Mr Trump's alleged indiscretions seemed to have been forgotten.

Mr Trump and the so-called "birther lie", suggesting Barack Obama was born in Kenya and not Hawaii, thereby making him ineligible to be president, has a long history.

The billionaire called Mr Obama's country of birth into question for five years, despite the Hawaii-born president having shown the world his birth certificate in 2008, and again in 2011.

Out on the campaign trail, he continued to refuse to acknowledge he had been wrong. But as the row risked damaging his chances of winning, the issue needed addressing.

Mr Trump decided it was a case of go big, or go home. Knowing his change of heart would make headlines around the world, he took control.

Instead of doing a quiet, one-on-one interview, he called the world's press together for a "big announcement" at his new hotel in Washington DC.

In fact, the "big announcement" would be only three sentences half an hour into a speech that started an hour late, during which time members of the military lined up to pay tribute to Mr Trump.

And just for good measure, he apportioned the blame (dubiously) on Mrs Clinton.

"President Barack Obama was born in the United States, period," he said.

"Hillary Clinton and her campaign of 2008 started the birther controversy. I finished it."

Yes. In an instant, the story was not only about the admission, but about the build-up and the choice (criticised by some) of his new hotel as the venue.

His abilities as a manipulator of the media were highlighted, and he even retweeted articles saying just that.

As the BBC's Anthony Zurcher noted at the time: "Mr Trump once again demonstrated he knows how to play the media like a violin - whether they wanted to be part of the concert or not."

Trump's connection to the birther controversy was very rarely mentioned after this. However, that may have been because there were greater scandals yet to come.