An explosion claimed by militant group Islamic State has ripped through a Muslim shrine in southwestern Pakistan, killing at least 43 people, officials said. 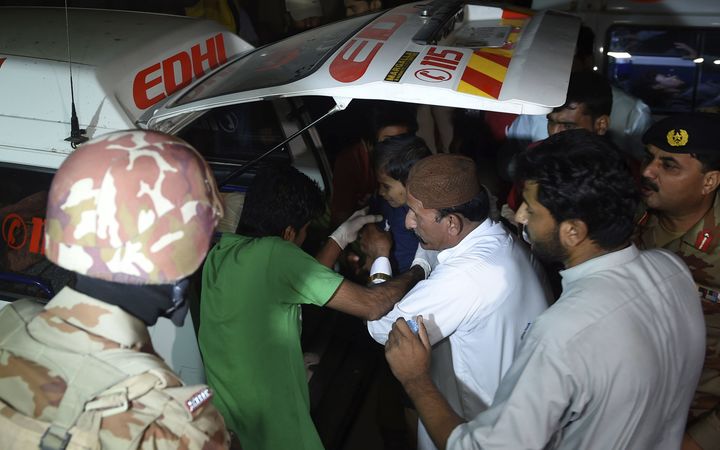 Volunteers move an injured blast victim from an ambulance at a hospital in the Hub district, some 40 kilometers from Karachi, Pakistan. Photo: AFP

The blast at Shah Noorani shrine occurred while hundreds of people were inside, local district commissioner Hashim Ghalzai told Reuters.

"Every day, around sunset, there is a dhamaal (ritual dance) here, and there are large numbers of people who come for this," said Nawaz Ali, the shrine's custodian.

The shrine is located in Baluchistan province about 100km north of the port city of Karachi, to where rescue official Hakeem Nasi told Geo TV dozens of wounded were being moved.

The government dispatched 25 ambulances from the nearby town of Hub to the shrine, said Akbar Harifal, provincial home secretary for Baluchistan. The army was called in to assist with rescue operations, given the remoteness of the site, Bugti said.

A renowned charity, the Edhi Foundation, said it had sent 50 ambulances which were carrying people to hospitals in Karachi, 100km away, but officials said they needed helicopters to save more lives.

It was not clear if the attack was carried out by a suicide bomber or a planted device, according to Bugti.

The province has seen some of the worst militant attacks this year in Pakistan.

Islamic State said in a statement via its Amaq news agency that its fighters had carried out Saturday's bombing.

The jihadist group also claimed responsibility for the last major attack in the province, at a police academy last month, that killed around 60 people.

Imran Khan, former cricketer and head of the Tehreek-e-Insaf party, said the attack had targeted the "core of our society".

Shocked at blast in Khuzdar, Balochistan at shrine of Shah Noorani: terrible loss of life. Govt must immed send helis to this remote area

Muslim shrines have often been targeted by militant groups, many of whom adhere to a strict interpretation of Islam that regards veneration of saints at shrines such as Shah Noorani as heresy.

Baluchistan is also a key link in a $46 billion transport and trade corridor between Pakistan and China, which hinges on a deep-water port in the southwestern city of Gwadar.