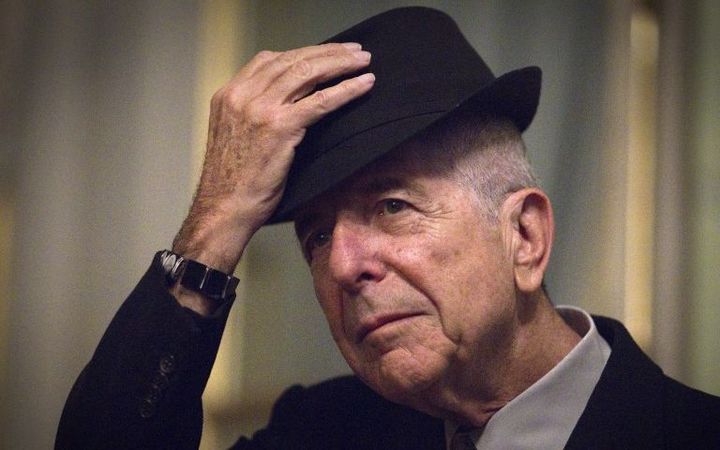 A message on his Facebook page read: "It is with profound sorrow we report that legendary poet, songwriter and artist, Leonard Cohen has passed away.

"We have lost one of music's most revered and prolific visionaries."

It said a memorial would take place in Los Angeles at a later date, and his family requested privacy during their time of grief.

Fans around the world are paying tribute and sharing their sense of loss on social media.

Oh no, so sad to hear about Leonard Cohen. One of my heroes. #LeonardCohen pic.twitter.com/AMLJKEEkoN

"I heard of a man
who says words so beautifully
that if he only speaks their name
women give themselves to him"... https://t.co/VpA1y7DDrY

Cohen had released a new album, You Want It Darker just last month.

Cohen, a native of Quebec, Canada, was already a celebrated poet and novelist when he moved to New York in 1966 at age 31 to break into the music business.

Before long, critics were comparing him to Bob Dylan for the lyrical force of his song writing.

Although he influenced many musicians and won many honours, including induction into the Rock & Roll Hall of Fame and the Order of Canada, Cohen rarely made the pop music charts with his sometimes moody folk-rock.

But Cohen's most famous song, Hallelujah in which he invoked the biblical King David and drew parallels between physical love and a desire for spiritual connection, has been covered hundreds of times since he released it in 1984.

Cohen was recently quoted in an article in The New Yorker saying that his poor health had him "confined to barracks" and he was "ready to die", but he continued to write poetry and make music.

Cohen's other numerous hits include I'm Your Man, Tower of Song, Dance Me to the End of Love, Bird on a Wire.

A life of poetry and music

Leonard Norman Cohen was born in Westmount, a well-to-do area of Montreal, on 21 September 1934.

His mother had emigrated from Lithuania to Canada and his father Nathan, whose ancestors came from Poland, owned a prosperous clothing store.

His father died when Cohen was just nine years old but left his son a trust fund that would enable him to pursue his chosen literary career.

The young Cohen attended a privately run Jewish co-educational day school where he learned to play guitar and formed a folk group called the Buckskin Boys. "Guitars impress girls", was the reasoning he gave.

In 1951 he enrolled at Montreal's McGill University to study English Literature, and published his first collection of poetry, Let Us Compare Mythologies, in 1956.

His poetry was well-received and after a year at Columbia University in New York he turned to writing full-time producing his second collection of poems, entitled The Spice Box of Earth, in 1961 when he was 27.

The volume established Cohen's reputation as a serious poet and became his most popular work. The poem, You Have the Lovers, captured his fascination with human relationships.

Cohen then moved to the small Greek island of Hydra, publishing his first novel, The Favourite Game, in 1963. He lived there with Norwegian Marianne Jensen, for whom he later wrote So Long Marianne.

Beautiful Losers, Cohen's second novel, was published in 1966, and was the last of his writing before he quit Hydra to move to the United States.

He arrived in New York in 1967, determined to pursue a career as a songwriter and musician. His debut album, Songs of Leonard Cohen which, while failing to become commercially successful, turned into something of a cult classic for folk buffs.

The song Suzanne, based on his poem Suzanne Takes You Down, became a hit for Judy Collins and has been covered by a variety of artists over the years.

Over the next seven years he recorded three more albums, Songs From a Room, Songs of Love and Hate and New Skin for the Old Ceremony, all of which featured in a series of US, Canadian and European tours on which he embarked during the 1970s.

These included a remarkable appearance at a highly charged Isle of Wight Festival in 1970. The crowd was volatile, Cohen was following an electrifying performance by Jimi Hendrix, but the quiet folk singer's commanding presence and intimate performance soon won the hostile crowd over and it is remembered as one of the defining moments of the whole Festival.

In 1973 Cohen went to Israel to volunteer for active service in the Yom Kippur war. Instead he was assigned to entertain troops in a tank division where he once found himself coming under fire in the Sinai desert.

The recording of his fifth album, Death of a Ladies' Man, descended into near farce. Cohen clashed with the unstable producer, Phil Spector, whose 'wall of sound' technique was at odds with Cohen's quiet acoustic based music. The resulting album was not a success.

Cohen's music fell out of favour in the late 1970s and early 1980s, but interest revived in 1985 with the release of the album Various Positions. This featured the track Hallelujah, which became the most covered Cohen composition of all time.

Popular singer Jennifer Warnes featured on that album and on his 1988 release, I'm Your Man, arguably his most accessible album, and the one which returned him to the mainstream of popular music.

Cynical commentaries such as First We take Manhattan, were paired with beautiful songs of love like the title track and Take This Waltz.

In 1991 a tribute album, I'm Your Fan, a collection of his songs covered by artistes such as REM, The Pixies and John Cale, again pushed Leonard Cohen back into the limelight.

However, by this time, Cohen had begun spending time at a Buddhist retreat in California and eventually moved there to become a Buddhist monk in 1996.

He finally emerged in 1999 with a wealth of new material, some of which featured on his 2001 album aptly titled Ten New Songs.

Co-written with the producer and vocalist, Sharon Robinson, who also played all the instruments, it saw Cohen in introspective and relaxed mood, but perhaps contemplating mortality with lyrics such as, "the night is getting colder".

In 2006 Cohen, at the age of 73, was obliged to return to touring when he discovered that his manager (and former lover)Kelley Lynch had embezzled more than $US5 million from his account.

Despite winning a court case against her, and being awarded huge damages, she failed to pay back any of the money. Lynch would later be jailed after violating a court order to keep away from Cohen.

Two years later he embarked on a massive concert tour in 2008 which ran for 18 months and included a performance on the Pyramid stage at Glastonbury which was seen by many as the highlight of the festival.

2012 saw the release of Old Ideas, which became his highest charting album of all time. Many critics saw the songs on the album as an intimation of his own mortality. However, despite his advancing years, Cohen set off on a world tour to promote the album

Leonard Cohen was, arguably, one of the most enigmatic poets and songwriters of his generation. While many of the themes in his work hinted at depression, he always felt that he was just a keen observer of the realities of life.

"Seriousness, rather than depression is, I think, the characteristic of my work," he once told an interviewer. " I like a good laugh, but I think there's enjoyment that comes through seriousness. We all know when we close the door and come into your room and you're left with your heart and your emotions, it isn't all that funny."