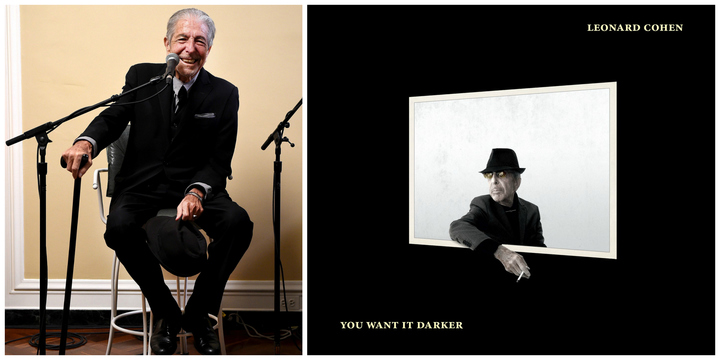 Nick Bollinger convenes a Sampler Summit to discuss You Want It Darker, the latest album from octogenarian singer-songwriter Leonard Cohen. He is joined by musicians Steve Abel and Hollie Fullbrook, and broadcaster Kim Hill.

A small shiver ran around the world when an article in The New Yorker quoted Leonard Cohen as saying that his poor health now had him “confined to barracks” and that he was “ready to die.” The October 2016 article – in which Cohen spoke a lot about death, among other things – coincided with the release of his new album You Want It Darker.

Just a couple of days ago, at a press conference in Los Angeles, Cohen appeared to be in good humour and good health, and said of his earlier remarks: “I think I was exaggerating. One is given to self-dramatisation from time to time. I intend to live forever” - which can only be good news for admirers of Leonard Cohen. To discuss You Want It Darker, The Sampler’s  Nick Bollinger brought together three such admirers: singer-songwriters Hollie Fullbrook (Tiny Ruins) and Steve Abel, and broadcaster Kim Hill.

Abel said: “I feel like Cohen’s form is one based on simplifying everything, and it forces you to focus almost entirely on the lyrical content which is his main thing. But it’s true, there’s some very subtle cleverness going on with his melodies sometimes.”

Fullbrook noted that “he’s always inserting sex and death and very human instincts [in his songs.] There will be a very cerebral verse but then there’ll be a very earthly verse.”

“When you first hear it you think, oh I have to slow down a bit and listen to this,” Hill added. “But then you start hearing those wry and rueful and funny lines and you realise it’s not heavy at all.

“[Bob] Dylan says he doesn’t see any disenchantment in Cohen’s lyrics and I think that’s true – there’s always an engagement with life, even when he’s got all the presentiment of death going on.”

Songs featured: You Want It Darker, Treaty, Leaving the Table, If I Didn’t Have Your Love, It Seemed The Better Way, Steer Your Way.

Leonard Cohen You Want It Darker is available on Columbia Records.