Opinion - Support for Donald Trump has been based on a cultural revolt and, in part, a demand for respect, writes Rob Hosking 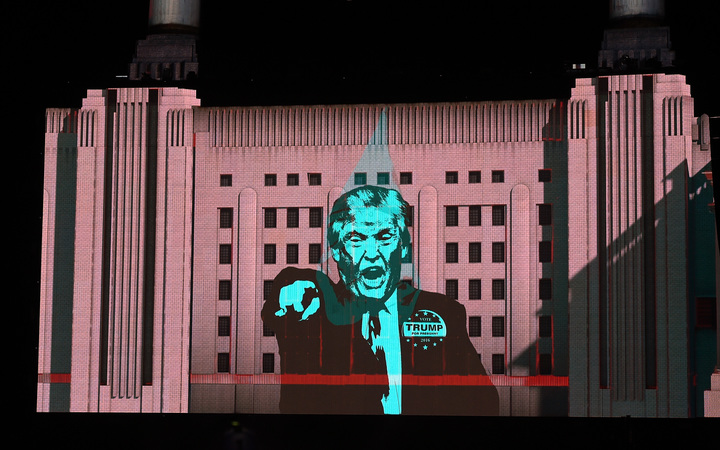 "There is a tendency for US Republican presidential nominees to be portrayed as either stupid warmongers or crooks". (Picture is an illustration of Donald Trump at the Desert Trip festival in California last month.) Photo: AFP

Time, I think, to take a deep breath.

Remember when Ronald Reagan was going to blow up the world? There was even a poster about it, a mock-up promotion of the film Gone with the Wind, of Ronnie holding Margaret Thatcher and the catch line "she promised to follow him to the end of the world! He promised to organise it!"

There has long been a tendency - really since World War II - for US Republican presidential nominees to be portrayed as either stupid warmongers or crooks.

Now in one or two cases that was true. But the propensity for the US commentariat to cry "wolf" has come back to leave some rather sharp and deep lupine tooth marks on the posterior.

About an hour before Associated Press finally called the presidential race for Donald Trump, a television reporter on one of the American networks was proclaiming that if Trump won it would mean "a divided America".

The fact that, given the closeness of the race, if Clinton had won at that point it would still have meant a divided America did not get a mention.

This has, as many have stated, been a revolt against the elites, part of the same wave of rage which drove the UK's vote in June to leave the European Union.

The standard objection to this is that Trump's supporters aren't actually those missing out: they're primarily middle class, white, but not particularly well educated.

I think this last point is the key.

Too much of the analysis has focused on simplistic rubrics around economic well-being and race. As far as race goes, you cannot deny that a big part of Trump's appeal has been pitched to racists.

It hasn't even been a dog whistle: to adopt the Kiwi vernacular, it has been an American version of the more than unsubtle bellow of "ged in behind!"

But it is too simplistic and too easy to merely point to the incomes of the people who voted for him.

It has been more cultural revolt, I think - and, in part, a demand for respect.

"Red State" voters have become tired of being patronised as being dumb, ignorant rubes whose choices, from what books they read (if any), what music they listen to, what food they eat, what television and movies they watch, what clothes they wear, and who they vote for are all viewed by the cultural elites as being not just bad but signs of stupidity and character flaws.

And you're not going to get people to support your side if you keep telling them they're a bunch of morally bereft morons for thinking and living the way they do.

There is a lesson there. And not just for Americans.

None of which is to deny that Trump represents something new and dangerous in the world.

He does. And this too comes back to that demand for respect, and ties in with Trump's pledge to "make America great again".

That demand for "respect" is, at its worst extremes, a demand for much more. There is more than a shade of the fat, excluded and resentful Southpark character Cartman about it.

In one episode, Cartman becomes a traffic officer and goes around town beating people with his nightstick and demanding "Respect My Authority!".

That sentiment is part of Trump's appeal, too. Let us hope it does not become Trump's foreign policy.