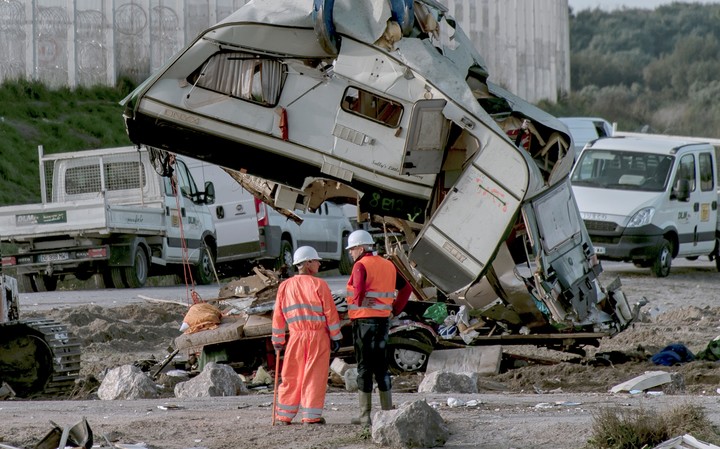 Workers watch as a crane destroys a caravan, once used as a makeshift shelter, at the site of the "jungle" migrant camp in Calais, northern France. Photo: AFP

More than 7000 migrants, including 1500 children, lived at the notorious Calais camp before evacuation began last Thursday.

The camp was halved in size earlier this year, but the population continued to rise and reports of violence increased.

The last shelters came down on Monday, leaving only debris to be cleared.

Fears remain for the children still in the area, as France and the United Kingdom argue about where to send them.

French President Francois Hollande said earlier the unaccompanied children, who lived in containers in a special part of the camp, would move to accommodation centres soon. The UK has so far agreed to take about 250.

Charity groups said they were giving the children food and water because of a lack of official support.

Many of the 5000 people evacuated from the jungle were taken to reception centres around France, where they would be processed and could apply for asylum.

Aid workers believe possibly thousands of migrants might have fled the area before demolition began.

Makeshift camps 'not worthy' of France

In Paris, riot police forced migrants back as tents in a makeshift camp were removed on Monday. 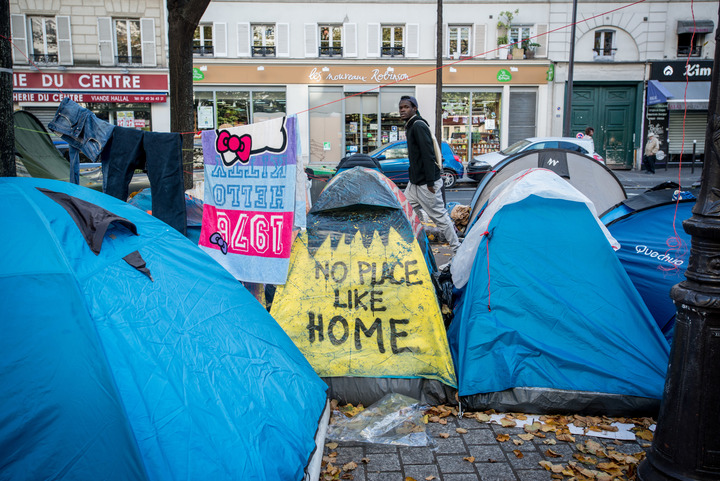 Migrants and refugees are living on the streets of northeast Paris, some of them from the dismantled Calais camp. Photo: AFP

The camp, in the city's northeast, expanded after the Calais jungle camp closed.

Numbers sleeping rough jumped from about 1,500 to an estimated 2,500 in the last week.

Makeshift camps have become common in the area, near the Stalingrad and Jean Jaures metro stations, as well as in other parts of the city.

On Monday, police did identity checks and cleared an area of the camp, but left the majority intact. A wider clearance was expected in the coming weeks.

On Saturday, President Hollande said he would shut down camps in Paris, saying they were "not worthy" of France.

"We cannot tolerate camps," he said. "It cannot be a long-lasting solution."

The city has been dealing with migrant camps springing up for months, prompting routine clearances by police.

What was the 'jungle'?

The jungle camp was near the port of Calais and close to the 50km Channel Tunnel.

Officially about 7000 migrants lived in the camp, but the Help Refugees agency said the final population was 8143.

Migrants fleeing war and poverty used the sprawling site as a staging post to try to reach the UK. Many migrants tried to hide in cargo vehicles entering the Channel Tunnel.