Angry residents of the India's capital Delhi are sharing images of smog a day after huge quantities of fireworks were set off to celebrate Diwali. 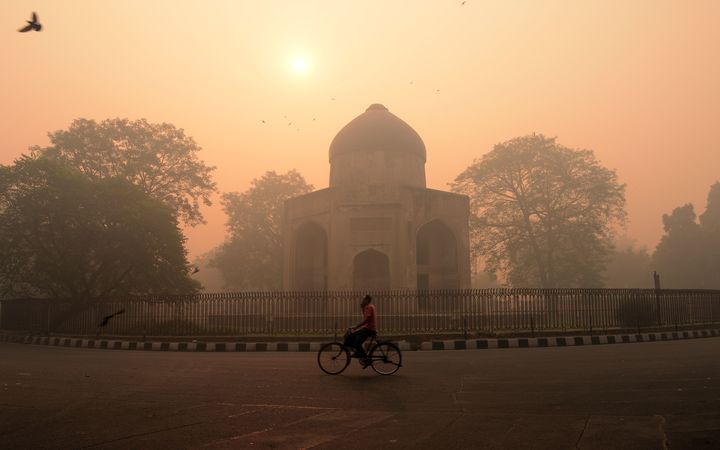 An Indian cyclist rides along a street as smog envelops a monument in New Delhi, the day after the Diwali festival. Photo: AFP

Levels of PM10 particulates, considered hazardous to health, rose to 999 micrograms per cubic metre in the city after the fireworks, far above the safe limit of 100.

Authorities had warned that Delhi was in for a polluted Diwali, due to factors like humidity and wind speed.

Firecrackers are regularly set off during Diwali, but worsen air quality.

Delhi's local government announced last week it would install air purifiers near roads in an effort to cut the effects of air pollution.

However, visibility across the city was extremely low on Monday morning, thanks to the thick blanket of smog covering the city.

On Monday morning, the hashtag #smog was trending on Twitter India.

Before Diwali, there were several campaigns asking people to cut down on the use of fireworks, but similar campaigns in the past have attracted little attention.

Firecrackers have become synonymous with celebrations, and for some, it is an opportunity to show off their wealth.

Business families spend hundreds of thousands of rupees to buy fireworks which are then set off in the course of a single night.

A World Health Organisation (WHO) survey in 2014 found 13 of the 20 most polluted cities in the world were in India, with Delhi at the top of the list.

Air pollution is also a leading cause of premature death in India, with about 620,000 people dying every year from pollution-related diseases, the WHO said.

Apart from fireworks on Diwali, Delhi's pollution in winter is aggravated by a drop in temperature which leads the city's poor to burn rubbish at night to stay warm.

Agricultural waste is also set on fire across thousands of hectares around Delhi to clear cropland, which burns for days on end.