Indonesian forest and agricultural fires cloaking South-East Asia in acrid haze are spewing more greenhouse gases into the atmosphere each day than all United States economic activity, according to an environmental watchdog. 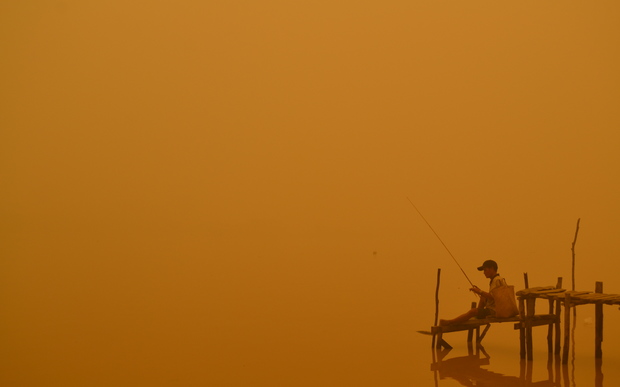 A resident fishes by the river in Palangkaraya city, Indonesia, one of worst-hit by haze in central Kalimantan province. Photo: AFP

The shock assessment came as Jakarta said the number of blazes was increasing across the archipelago despite a multinational firefighting effort, and announced plans to deploy more water-bombing aircraft.

The haze, which has sent air quality levels up to "very unhealthy" levels in neighbouring Malaysia and Singapore, was now affecting the Pacific nations of Guam, Palau and the Northern Marianas.

Guam's Office of Homeland Security and Civil Defence spokesperson Jenna Gaminde has warned the public to expect the haze to reduce visibility and adversely affect those with respiratory issues.

Western Melanesia was susceptible to winds from typhoons Koppu and Champi pulling smoke plumes from vast fires in Indonesia and Papua New Guinea.

For nearly two months, thousands of fires caused by slash-and-burn farming have suffocated vast expanses of the region with smog, causing respiratory illnesses to soar, schools to close, and scores of flights and some international events to be cancelled.

The World Resources Institute (WRI) said in a recent report that since early September, carbon emissions from the fires had exceeded average US daily output on 26 out of 44 days.

The US is the world's second-largest greenhouse gas source after China. The WRI normally classifies Indonesia as the fifth-largest emitter.

"The burning of tropical peatlands is so significant for greenhouse gas emissions because these areas store some of the highest quantities of carbon on Earth, accumulated over thousands of years," the WRI, which used findings from the Global Fire Emissions Database for the report, said.

Much of the burning was in peatlands, drained and cleared by farmers illegally, and at a rapid rate, to make way for agriculture and in particular fast-expanding palm oil plantations.

Borders no barrier to haze

Malaysia, which in recent weeks has repeatedly ordered school closures across several states as a health precaution, did so again on Wednesday for the third straight day as pollution levels climbed.

Air quality was in the "very unhealthy" range near the capital Kuala Lumpur, under the government's rating system, with much of the rest of the country experiencing "unhealthy" air.

In Singapore, air quality was also in the "unhealthy" range.

Experts warned the current outbreak was on track to become the worst ever, exacerbated by bone-dry conditions caused by the El Nino weather phenomenon. 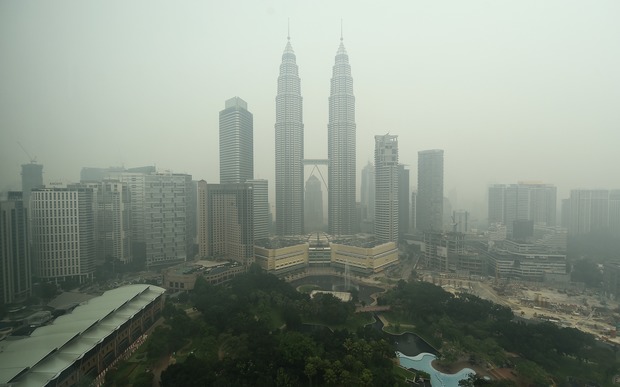 The fires on the huge islands of Sumatra and Borneo were typically only brought under control by November with the onset of the rainy season.

But Herry Purnomo, a scientist at the Indonesia-based Centre for International Forestry Research, said that climatology data indicated the rainy season may be delayed this year and that the fires could last until year's end.

As well as on Sumatra and the Indonesian part of Borneo, a substantial number had been detected in the easternmost region of Papua, the agency said. Papua was not typically affected by widespread outbreaks of agricultural fires.

About 30 planes were currently involved in water-bombing and artificially inducing rain, with Singaporean, Australian and Malaysian aircraft having taken part.

But with Indonesia experiencing a prolonged dry season with no rain in sight, manned efforts to put out the fires remained hindered.