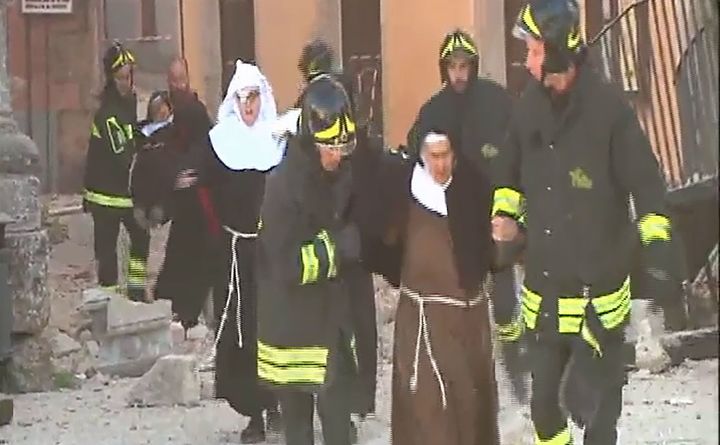 The US Geological Survey (USGS) said the earthquake struck about 6km north of Norcia, 10km deep at a magnitude of 6.6, revised from its intial reports of 7.1 magnitude at 108km deep.

Italy's civil protection department, Protezione Civile, said the earthquake had brought down buildings in "numerous places" in the centre of the country.

It also said there was no word yet on any casualties. State broadcaster RAI said three people were rescued from rubble in the town of Ussita, but there were no reports of deaths.

Live television coverage showed the collapse of a church in the centre of Norcia, a town near Perugia in Umbria. Parts of the town had already been sealed off.

Frightened residents rushed into squares and streets after the shake, about 7.40am local time.

It was more powerful than the 6.2 earthquake in August, which killed almost 300 people in the region and levelled several small towns.

"This morning's quake has hit the few things that were left standing. We will have to start from scratch," Michele Franchi, the deputy mayor of Arquata del Tronto, told Rai television.

Many of those places were evacuated after the August shake and were largely deserted on Sunday morning.

Buildings damaged in Norcia included the historic Basilica of St. Benedict and the town hall.

The shake was felt as far north as Bolzano near the border with Austria, and as far south as the Puglia region at the southern tip of the Italian peninsula.

It was felt strongly in the capital, Rome, where services on the Metro were suspended.

The nearby towns of Castelsantangelo, Preci and Visso were mainly abandoned after two earthquakes last week.

New Zealand's Ministry of Foreign Affairs and Trade said it was not aware of any New Zealanders affected by the quake.

The New Zealand Embassy in Rome was contacting New Zealanders registered on SafeTravel thought to be in the affected area to confirm their safety.

The ministry said 217 New Zealanders were registered on SafeTravel as being in Italy.

Italy sits on two fault lines, making it one of the most seismically active countries in Europe.

Before this year, the last major earthquake to hit the country struck the central city of L'Aquila in 2009, killing more than 300 people.

The most deadly since the start of the 20th century came in 1908, when an earthquake followed by a tsunami killed an estimated 80,000 people in the southern regions of Reggio Calabria and Sicily.