A mass funeral has taken place in Italy for some of the 290 people killed in Wednesday's powerful earthquake. 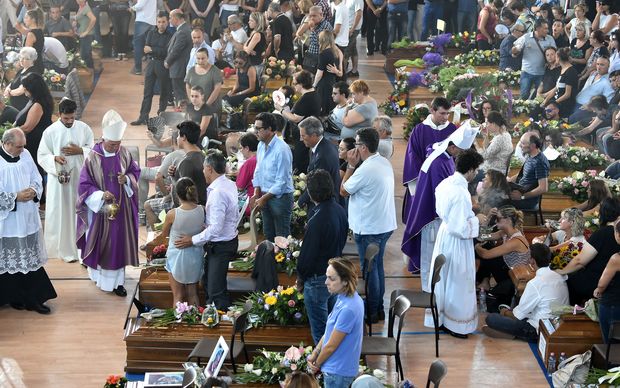 People attend a funeral service in Ascoli Piceno for victims of the earthquake. Photo: AFP

The 6.2 magnitude quake hit in the early hours of Wednesday, 100km north-east of Rome.

Thirty-five victims from the town of Arquata were mourned at a sports hall in the regional capital, Ascoli Piceno.

The coffins, laid out in rows on the floor, included two painted white for two children killed.

The death toll from the quake, which struck a mountainous central region, has again risen as more bodies were found.

Prime Minister Matteo Renzi was among those attending the funeral along with President Sergio Mattarella, who earlier visited Amatrice, the town with the most casualties.

Bishop Giovanni d'Ercole urged those affected not to lose courage.

"Together, above all we will restore life to our communities, starting from our traditions and from the rubble of death," he said.

One of the children's coffins contained the body of Giulia Rinaldo, whose younger sister survived the earthquake because she was under Giulia's body.

One of the firefighters, Andrea, had left a moving note on Giulia's coffin, apologising for arriving too late, and signing it with a heart symbol.

The coffins will be taken for burial to a cemetery near Arquata, a local official told Ansa news agency.

Most victims of the earthquake were Italian, but several foreigners were among those killed.

More aftershocks were registered in the early hours of Saturday, one of which was a magnitude 4.

The ground beneath Accumoli, another severely affected village, sank 20cm as a result of the earthquake, satellite images obtained by Italy's scientific authorities show.

More than 200 people died in Amatrice alone. Along with Arquata and Accumoli, Pescara del Tronto was also hard-hit. 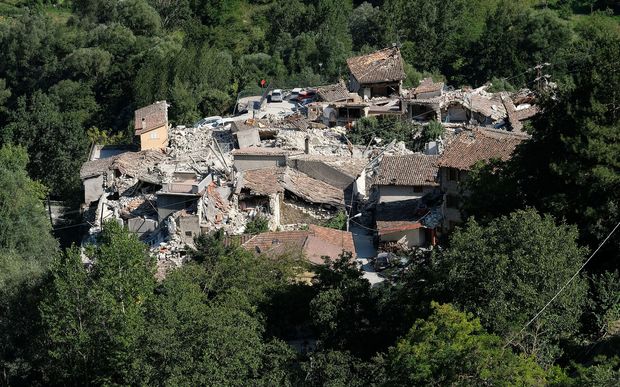 Many bodies have also been brought to a makeshift morgue in an aircraft hangar in the city of Rieti, where relatives have been identifying loved ones.

The first funeral for one of the earthquake's victims was held on Friday, for the son of a state official who died in Amatrice.

At least 388 people have been treated in hospital for their injuries while more than 2000 people were made homeless.

Italy's government has been criticised for failing to prevent deaths after the 2009 earthquake in nearby L'Aquila left 300 dead.

Historic towns do not have to conform to anti-quake building regulations, which are also often not applied when new buildings are put up.

But he also said that it was "absurd" to think that Italy could build completely quake-proof buildings.