Almost 2000 refugees and migrants have been bussed away from the "Jungle" in Calais as French authorities clear the camp.

At least 7000 people have been living there in squalid conditions.

Refugees and migrants queued peacefully to be processed, but there are concerns some will refuse to go because they still want to get to the United Kingdom.

Almost 200 children from the camp have been brought to the UK, some of them under the "Dubs" arrangement, according to UK Home Secretary Amber Rudd.

The number includes 60 girls who were at high risk of sexual exploitation, she said.

But the process of transferring some of the estimated 1300 unaccompanied children from the camp was halted on Monday at the request of the French. 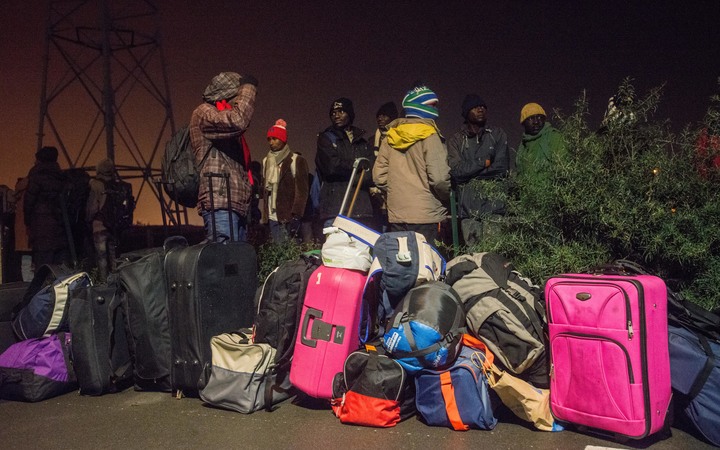 Almost 2000 refugees and migrants have been bussed out of the "Jungle". Photo: AFP

The dismantling of the camp is expected to start on Tuesday (local time).

Long queues formed earlier outside reception centres in the camp as the French authorities worked to determine whether individual refugees and migrants were with family members or travelling alone, and whether they were deemed to be vulnerable.

After processing, they boarded buses to different parts of France where they will be given the opportunity to claim asylum, or face deportation.

At least 40 of the 60 coaches planned to transport them have now left, according to BBC correspondents at the scene.

In a statement, French Interior Minister Bernard Cazeneuve said 2318 refugees and migrants had been "given shelter" on Monday.

400 minors were transferred to "provisional reception centres" within the camp, he added.

The first step of the clearance had taken place in a "calm and controlled manner", he said.

Some volunteers complained earlier that the refugees and migrants had not been given enough information about the plans and warned of a sense of confusion and chaos.

About 7500 beds are being made available in 450 centres across France. So far refugees and migrants have been taken to the regions of Auvergne-Rhone-Alpes, Bourgogne-Franche-Comte, Brittany, Pays de la Loire, Poitou-Charentes, Grand Est and Nouvelle Aquitaine.

Last year more than one million migrants - many fleeing the civil war in Syria - arrived in Europe. Countries struggled to cope and division arose in the EU over how best to deal with resettling people.

An EU-Turkey pact to try to stop migrants crossing to Greece and moves by Balkan nations to close their borders have driven down the number of people using the so-called eastern Mediterranean route.

However, refugees and migrants from African countries such as Eritrea and Somalia as well as West African nations such as Nigeria and the Gambia are continuing to attempt the crossing from Libya to Italy.