Russia says it will extend by 24 hours its "humanitarian pause" in air strikes on rebel-held eastern Aleppo, taking the break up until Friday afternoon.

UN humanitarian chief Jan Egeland said he hoped hundreds of sick and wounded could be evacuated by the deadline.

But rebels have rejected the truce, with reports of continued clashes and few residents heeding calls to leave. 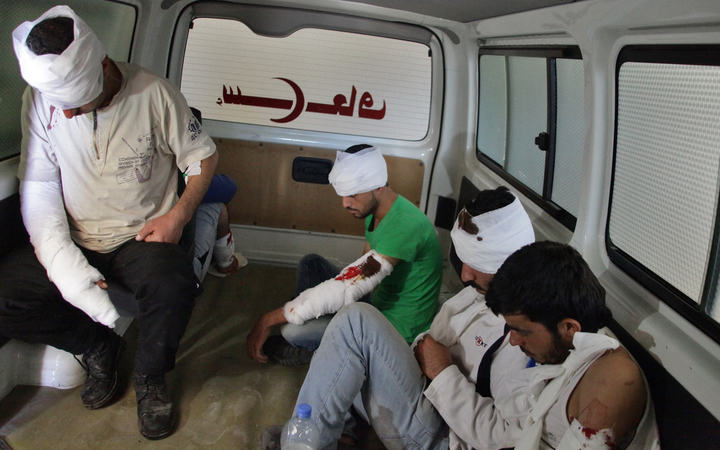 Wounded opposition fighters in an ambulance in Aleppo, as clashes erupted in an area designated as a humanitarian corridor for civilians to leave the embattled city, despite an announced pause in the Syrian army's Russian-backed offensive. Photo: AFP

Mr Egeland said he hoped the first of "several hundred" people most in need of medical help could be brought out on Friday with the help of the World Health Organization and the Red Cross.

"We believe we now have all of the green lights that we need both from the Russians and the government and from the armed opposition groups," he said.

But he warned: "This is Syria, so everything can go wrong at every possible opportunity."

Russian and Syrian forces first suspended their air strikes on Tuesday. Russian officials say the pause has opened eight exit corridors from the east of the city to allow civilians and rebel fighers to leave.

But soon after the truce took effect on Tuesday, some of the corridors were reported to have come under fire, with opposition and government forces blaming each other.

The UN was told Russia would continue the truce for 11 hours a day until Saturday, Mr Egeland said, but Russia has so far only publicly confirmed an extension of 24 hours.

Syria is also offering an eight-hour daily truce, according to state media, but it was not clear how long for.

But the truce was reported to have had little impact on the ground. Ammar Jaber, a correspondent for Orient News, a Dubai-based pro-opposition TV channel, said he had seen just a few civilians leaving at two of the crossings intended for evacuation.

Syria's state-run news agency has blamed "terrorist groups" for the exchanges of fire, and the Russian state-run broadcaster Rossiya 24 said members of Jabhat Fatah al-Sham, a militant group once aligned with al-Qaeda, were preventing people from leaving.

Some 2700 people have been killed or injured in the bombardment since then, according to the Syrian Observatory for Human Rights, a UK-based monitoring group. About 250,000 civilians who live in Aleppo have been trapped by the fighting.

Western leaders have said Russian and Syrian air strikes on Aleppo could amount to war crimes, an accusation rejected by Russia.

European Council President Donald Tusk said on Thursday his organisation should keep "all options open, including sanctions" when considering Russia's involvement in Syria.

Jihadist group Jabhat Fateh al-Sham, which was known as al-Nusra Front until it broke formal ties with al-Qaeda in July, has vowed to fight on despite Russia's pledge of a truce.

The UN, which regards Jabhat Fateh al-Sham as a terrorist organisation, says the group has 900 fighters inside Aleppo, out of a maximum of 8,000 rebels in total.