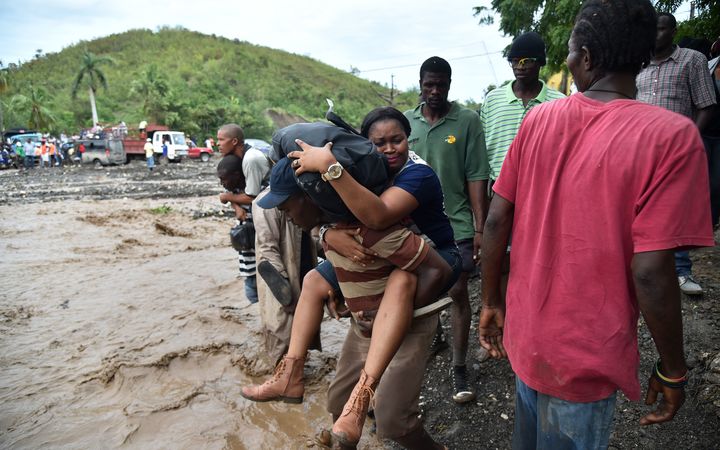 People in Haiti cross the river La Digue in Petit Goave where the bridge collapsed during the rains from Hurricane Matthew. Photo: AFP

At least 13 people have already died of the disease and aid workers and officials are rushing to repair treatment centres in southwest Haiti, which bore the brunt of the storm.

In the United States, 16 people died after the hurricane flooded much of the country's southeast before weakening overnight NZT and turning out to sea.

Matthew, the most powerful Atlantic storm since 2007, has since been downgraded to a post-tropical cyclone.

In Haiti, which was first hit late last week, about 61,500 displaced people were in shelters, officials said.

A freelance journalist in Port au Prince, Nick Davis, told RNZ fears were rising that a cholera outbreak could escalate.

"The fact that we've had so much floodwater, the fact that there's been so much sewage which has gone into the drinking water supplies, means that cholera is a major concern.

"Bearing in mind that [a previous] epidemic saw nearly 10,000 people die, it's clearly an issue the authorities are trying to deal with."

Burials for some of the country's dead in mass graves have started, coinciding with three days of official mourning.

Cornelia Walter, from UNICEF, who had just arrived in the hard-hit city of Les Cayes, said the extent of the disaster was still unfolding.

"I just finished talking to a family that say, 'well they lost basically everything, our house is destroyed."

"They all talk about the big wind.

"We're right now in a small shanty town which is close to the ocean and they say the ocean just washed over their house and took everything away.

Laura Sewell, from CARE International, said there were more than 60,000 people still living in shelters.

"So, a large number of people are still in shelters and over 115,000 people's homes have been destroyed," she said.

"So as we're getting more information, and as the roads are opening and the phone lines are opening, we're starting to hear a little about what the effects of Hurricane Matthew have been, and it seems that they have been pretty terrible." 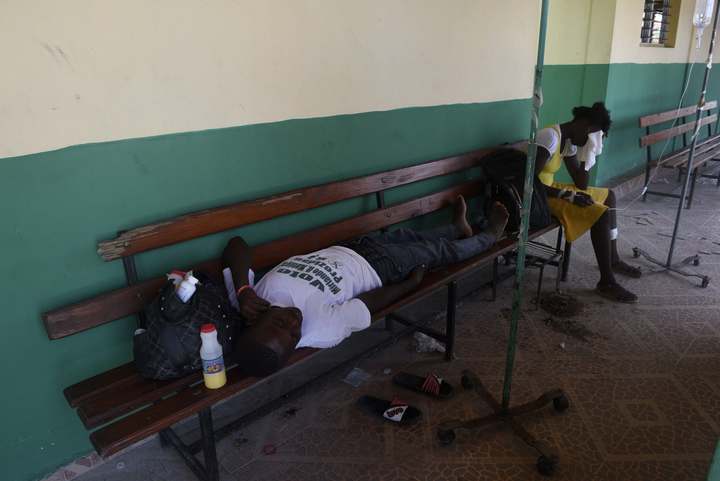 A man affected by cholera lies on a bench, following the passage of Hurricane Matthew, at the hospital in Port-Salut. Officials fear a cholera outbreak could add to the hurricane's death toll of 900. Photo: AFP

Storm heads to sea after flooding US south-east

In the US, more than two million homes and business lost power during the storm.

Officials said many coastal and inland communities were still under water, either from coastal storm surge or overrun rivers and creeks, and dangerous conditions existed from downed power lines and damaged homes.

US President Barack Obama declared a state of emergency in Georgia and Florida, freeing up federal money to help the states repair damaged infrastructure and remove debris. North Carolina and South Carolina also could be in line for aid.

Flooding in North Carolina required 877 water rescues, with emergency crews in boats rescuing hundreds of people from floodwaters and plucking others from rooftops by helicopter.

The storm was moving northeast out to sea, according to the latest US National Hurricane Centre report, which placed the centre of the storm 160km off the coast of North Carolina.

Although Matthew had lost its tropical characteristics, no longer feeding off warm ocean water, the storm still packed dangerous winds with a maximum speed of 120km/h, down from 210km/h at full strength.