Russia says it will block a French plan to halt the bloodshed in the embattled Syrian city of Aleppo. 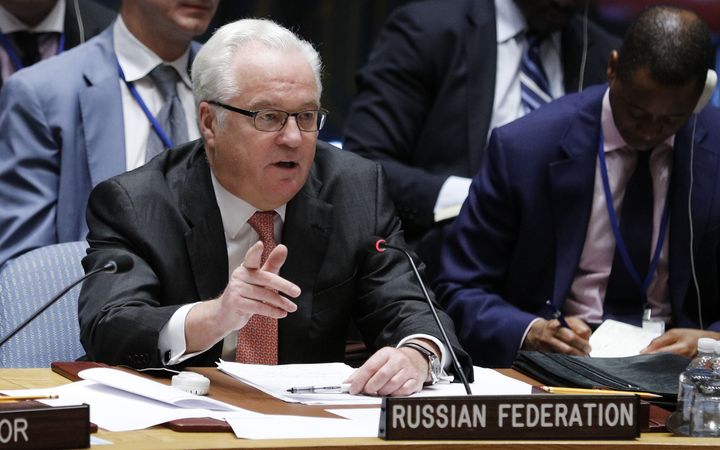 Russia earlier said it was ready to support a new UN plan to end violence in Aleppo, but its UN ambassador, Vitaly Churkin, said he believed the plan was just a diplomatic manoeuvre to put Russia in a position where it would be forced to veto a ceasefire.

"It is unprecedented for the members of the council to ask a permanent member of the security council to limit its own activities," he said.

"You know, there are certain things we may do or not do - we may fly or not fly - but definitely they cannot expect we will get there through a demand by the security council."

The proposal called for an immediate truce and an end to flights over the city by Russian and Syrian government warplanes.

The United Nations security council was expected to vote on the plan later today.

UN envoy Staffan de Mistura appealed to fighters from the former Nusra Front faction to withdraw from the city but the jihadi faction rejected the offer.

US Secretary of State John Kerry said Russia's actions in support of the Syrian government demanded a war crimes investigation.

Mr Kerry accused Moscow and the government in Damascus of having a targeted strategy to terrorise civilians in the city of Aleppo and kill anyone who stands in the way of their military objectives.

He said Russia owed the world an explanation about why facilities housing women and children kept being hit.

"These are acts that beg of an appropriate investigation of war crimes, and those who commit these would and should be held accountable for these actions.

"They're beyond the accidental, now."

Meanwhile, Russia's lower house of parliament has approved an agreement that will allow the Russian military to stay in Syria indefinitely.

The air force base at Hemeimeem was set up as a temporary facility a year ago at the start of Russia's campaign in support of President Assad's government.