Rebel-held eastern parts of the Syrian city of Aleppo may face "total destruction" in two months, with thousands killed, the UN's envoy says. 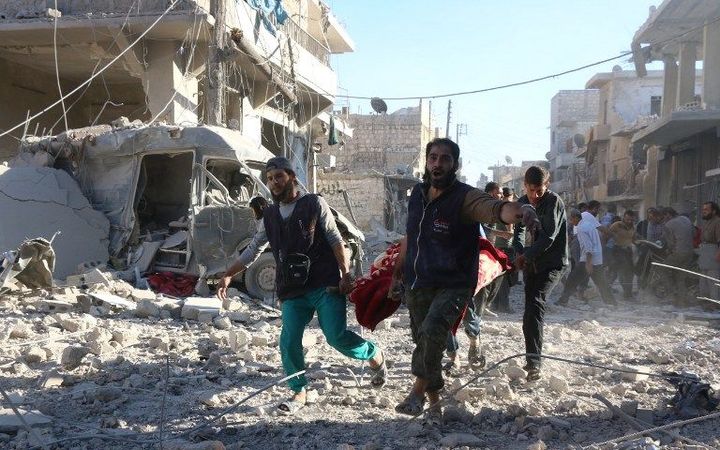 Staffan de Mistura told reporters that he was prepared to personally accompany al-Qaeda-linked jihadists out of the city, where more than a quarter of a million civilians are trapped, if it would stop the fighting.

He also appealed to Russia and Syria's government not to destroy the city for the sake of eliminating militants.

Troops have been besieging the east, where 275,000 people live, for a month.

"The bottom line is, in a maximum of two months, two and a half months the city of eastern Aleppo at this rate may be totally destroyed," Mr de Mistura told a news conference in Geneva.

"Thousands of Syrian civilians, not terrorists, will be killed and many of them wounded."

He added: "This is what you, we, the world will be seeing when we will be trying to celebrate Christmas, or the end of the year, if this continues at this rate, unimpeded. Homs [Syrian city] multiplied by 50."

He said the UN was not willing to "be passive, resign ourselves" to genocides such as those in Srebrenica and Rwanda.

Syrian President Bashar al-Assad has vowed his forces will recapture all of Syria, including Aleppo, according to Reuters.

But he said he would prefer to do so using local deals and amnesties that will allow rebels to leave for other areas.

Russia and Syria say their forces are attacking the powerful jihadist group Jabhat Fateh al-Sham, which was known as al-Nusra Front until it it formally broke off ties with al-Qaeda in July.

Mr de Mistura said about 900 of the 8000 fighters in eastern Aleppo were members of Jabhat Fateh al-Sham and that he would willingly accompany them out of the city if they decided to leave.

Addressing the group directly, he asked if they were willing to decide the destiny of 275,000 people.

"If you did decide to leave in dignity, and with your weapons, to Idlib or anywhere you wanted to go, I personally am ready physically to accompany you," he said.

He also warned Syria and Russia that history would judge them if they used the presence of the jihadists in Aleppo as "an alibi perhaps for destroying a whole city".

The besieged east of Aleppo has come under intense aerial bombardment since a cessation of hostilities brokered by the US and Moscow collapsed last month.

Diplomatic efforts to revive the ceasefire have so far come to nothing. The US has since suspended any military co-operation with Russia over Syria.

Mr de Mistura said at least 200 wounded civilians were in need of evacuation to save their lives.

Mr Assad has told Danish television that the United States is using rebels linked to al Qaeda as "a card" in Syria's war, and that if hospitals or schools are being hit by government air strikes and shelling, then it is accidental and not a tactic.

Meanwhile, Jan Egeland, the UN humanitarian advisor, said at least 376 people had been killed and 1266 wounded in the last two weeks in Aleppo.

He added that the Syrian government has given no permits for aid convoys anywhere in the country in October.