Philippine leader Rodrigo Duterte on Tuesday told United States President Barack Obama to "go to hell" and said the United States had refused to sell some weapons to his country but he did not care because Russia and China were willing suppliers.

In his latest salvo, Mr Duterte said he was realigning his foreign policy because the US had failed the Philippines and added that at some point, "I will break up with America". It was not clear what he meant by "break up". 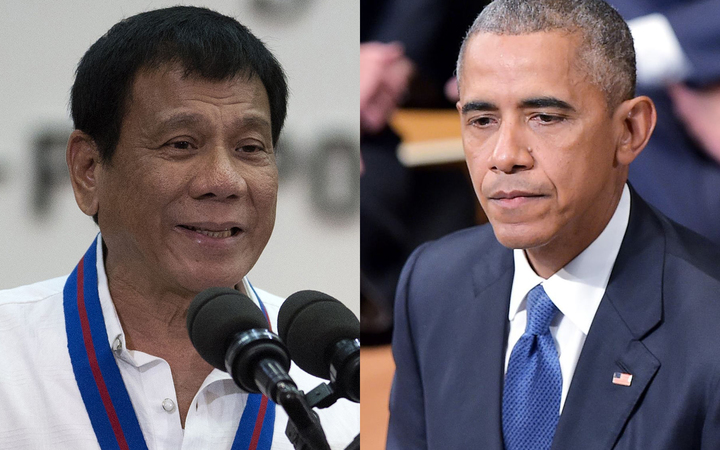 Rodrigo Duterte says Barack Obama can "go to hell" after the US refused to sell some weapons to the Philippines. Photo: AFP

During three tangential and fiercely worded speeches in Manila, Mr Duterte said the US did not want to sell missiles and other weapons, but Russia and China had told him they could provide them easily.

"Although it may sound shit to you, it is my sacred duty to keep the integrity of this republic and the people healthy," Mr Duterte said.

"If you don't want to sell arms, I'll go to Russia. I sent the generals to Russia and Russia said 'do not worry, we have everything you need, we'll give it to you'.

"And as for China, they said 'just come over and sign and everything will be delivered'."

His comments were the latest in a near-daily barrage of hostility towards the US, during which Mr Duterte has started to contrast the former colonial power with its geopolitical rivals Russia and China.

In Washington, US officials downplayed Mr Duterte's comments, saying they were "at odds" with the two countries' warm relationship and decades-long alliance. White House spokesman Josh Earnest said there has been no communication from the Philippines about making changes in that relationship.

Earnest did not, however, back down from criticism of Mr Duterte's tactics in his deadly war on drugs.

"Even as we protect the strong alliance, the administration and the United States of America will not hesitate to raise our concerns about extrajudicial killings," he said at a briefing.

On Sunday, Mr Duterte said he had received support from Russia and China when he complained to them about the United States. He also said he would review a US-Philippines Enhanced Defence Cooperation Agreement.

The deal, signed in 2014, grants US troops some access to Philippine bases, and allows them to set up storage facilities for maritime security and humanitarian and disaster response operations.

Mr Duterte said the US should have supported the Philippines in tackling its chronic drugs problems but that instead it had criticised him for the high death toll, as did the European Union.

"EU, better choose purgatory. Hell is full already. Why should I be afraid of you?"

At a later speech he said he was emotional because the US had not been a friend of the Philippines since his election in May.

"They just ... reprimand another president in front of the international community," he told the Jewish community at a synagogue.

"This is what happens now, I will be reconfiguring my foreign policy. Eventually, I might in my time I will break up with America."

It was not clear if by his "time", he was referring to his six-year term in office.

According to some US officials, Washington has been doing its best to ignore Mr Duterte's rhetoric and not provide him with a pretext for more outbursts.

While an open break with Manila would create problems in a region where China's influence has grown, there were no serious discussions about taking punitive steps such as cutting aid to the Philippines, two US officials said on Monday.

Several of Mr Duterte's allies on Monday suggested he act more like a statesman because his comments had created a stir. On Tuesday, he said his outbursts were because he was provoked by criticism of his crackdown on drugs.

"When you are already at the receiving end of an uncontrollable rush, the only way out is to insult," he said.

"That is my retaliation."