Wild weather is expected to hit South Australia from midday, with flood watches in place across the state.

Australian Bureau of Meteorology (BoM) regional director John Nairne said the state needed to be prepared because it was "going to get a bit of bang out of the trough that comes through before the low arrives".

"It's a clockwise rotating system and in its own right it's a powerful system, and not to be confused with tropical cyclones."

The "vigorous cold front" is expected to hit the West Coast near Ceduna at about midday (local time), with waves of up to 11 metres expected to batter the coast.

"What we've got with this event this afternoon is a trough approaching and we get a vigorous line of thunderstorms and rain," Mr Nairn said.

The bureau issued a severe weather warning for damaging winds for the West Coast and parts of the Lower Eyre Peninsula, Eastern Eyre Peninsula and North West Pastoral districts.

"Strong to gale-force west to south-westerly winds averaging 50-65 km/h with gusts about 90-100 kph are expected to develop behind the front during Wednesday," a bureau statement said.

"These winds may cause damage to trees and property."

It would then hit Adelaide in the early evening, with between 50 to 100mm of rain forecast for the Mount Lofty Ranges. 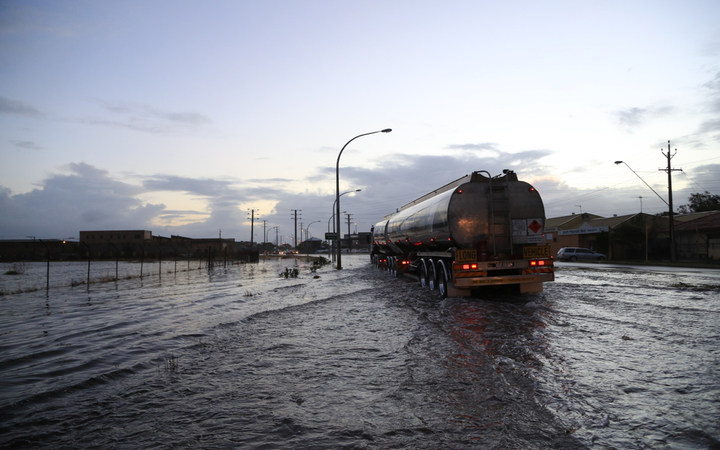 Adelaide is expected to be hit this evening, after facing flooding two weeks ago. Photo: AFP

A flood watch was in place for the Mid North, Mount Lofty Ranges and Adelaide Metropolitan District.

The BoM warned there was a risk of rapidly rising water levels and flooding in creeks and rivers across the watch area, in particular the Mount Lofty Ranges from this afternoon.

It comes just two weeks after homes across the Greater Adelaide area were flooded by burst rivers and creeks.

BoM forecaster Mark Analak said he had never before seen such a forecast for Sout Australia.

"It's a big one, I must say I've been forecasting here in Adelaide for the best part of 15 years and I can't recall wind strengths around a low pressure system moving onto the coasts of this strength," he said.

"There is absolutely no doubt there will be powerlines down and SA Power Networks crews will be stretched with this event," he said.

"This is one of the most severe weather events this state has faced in recent history."

Weather Bureau says winds to hit Adelaide over next couple of days will be the strongest in 52 years @abcnewsAdelaide pic.twitter.com/zuVOwWJeOO