A hundred homes have been inundated with water and people have been evacuated from a New South Wales town, as floodwaters cut off roads and cause widespread damage to crops.

The Lachlan River is expected to peak at 10.7 metres later today, half a metre higher than expected, and residents of Forbes have been warned the flooding could result in the town being split in two. 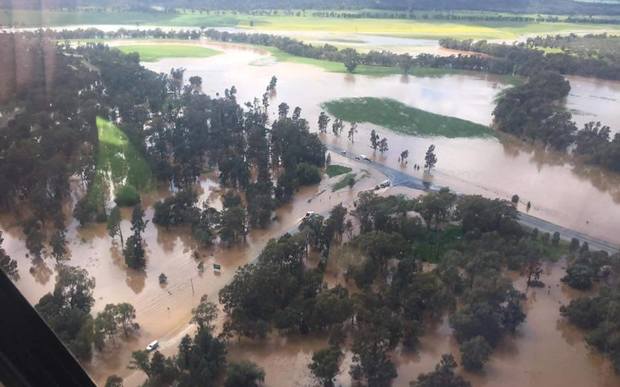 The town was divided into two parts when the river reached 10.43 metres in 1990.

Some of those forced from their homes spent the night in Forbes High School, which had been turned into an evacuation centre.

The Bureau of Meteorology (BOM) issued a moderate to major flood warning for the Lachlan River.

"Major flooding is occurring at Forbes Iron Bridge, Cottons Weir and Jemalong where flood peaks similar to the August 1990 event are expected," a statement on the BOM website said.

"Downstream at Condoblin and Euabalong major flooding is occurring ahead of a second higher peak due next week."

The river had previously reached similar levels in flooding in 1990 and 2012, he said.

"The way the flood has behaved in Forbes is not the same as previous years," he said.

"Water we expected to see within the evacuation area is not as bad as what it has been." 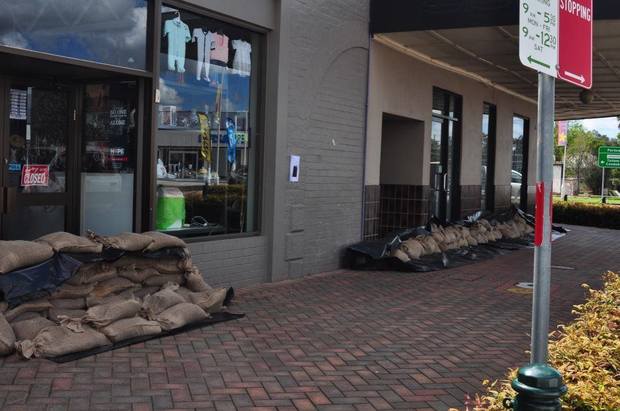 Businesses and homes in Forbes have prepared for flooding by blocking entrances with sandbags. Photo: Facebook / NSW State Emergency Service

As a result, it was difficult to get the right message out to people to encourage them to leave, he said.

"Three to five days is a long time to go without essential goods," he said.

"Flood water has a lot of stuff in it that's not nice, there is chemicals from properties, dead livestock in the area.

"We prefer people to leave … there are high risks in staying in that area."

Mr Morrow said he understood why people were choosing to stay, but they needed to make sure they had all the right information.

"We are working with those communities, not forcing them to [evacuate]."

The damage to the district was already "quite significant", he said.

"There is a lot of crop damage out in the rural parts."

Cheryl, who has lived in Forbes for about 50 years, said the community was already bracing for the river to peak later tonight.

She also said her home was under threat and she was concerned for the town.

"Particularly for the business owners that have had to lift goods and sandbag their businesses and will lose trade," she said.

"It's pretty imminent, if it gets any higher we could be in trouble.

"We sandbagged around the house ... we just let it go through the sheds, it was only minimal last night but it's going to increase if that peak's going to be higher."

The SES had received more than 2000 requests for assistance and was expecting more as waters rise further.