Charlotte police have released body camera and dashboard videos showing the fatal shooting of a black man that triggered protests in the North Carolina city, but the footage did not show whether the victim was holding a gun. 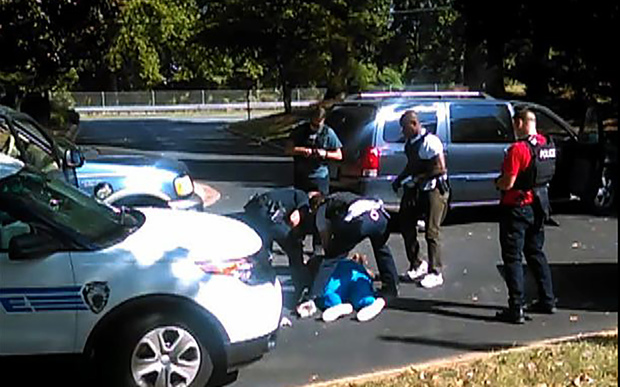 Demonstrators gathered in the city for a fifth day demanding that the public be allowed to see clips of the shooting after the release of footage shot by Keith Scott's wife.

Protesters have rejected police statements that Keith Scott, a 43-year-old father of seven, was holding a gun.

In one of the police videos, Scott is shown getting out of his car and then backing away from it.

Police officers shout to him to drop the gun, but it is not clear that Scott is holding anything, and his hands appear to be at his side.

Four shots then break out and Scott drops to the ground.

The family of Mr Scott say he was carrying a book and not a gun.

Charlotte police chief Kerr Putney told reporters the victim was "absolutely in possession of a handgun".

Speaking at a press conference, Mr Putney released the first real details from police on a case that has been mired in controversy and uncertainty.

Hundreds of protestors faced off against police for several nights following the shooting.

Mr Putney said Mr Scott, 43, was in possession of marijuana and that he had committed another crime, which the police chief would not elaborate on.

He said that the officers who confronted Mr Scott were conducting surveillance when they spotted marijuana in the victim's car, and subsequently saw a gun.

In a video released earlier in the week, filmed by Mr Scott's wife, she can be heard telling officers repeatedly that he does not have a weapon.

Mr Putney said that the bodycam footage contained "no definitive visual evidence that he [Mr Scott] had a gun and pointed it at officers", but that police were satisfied he did. 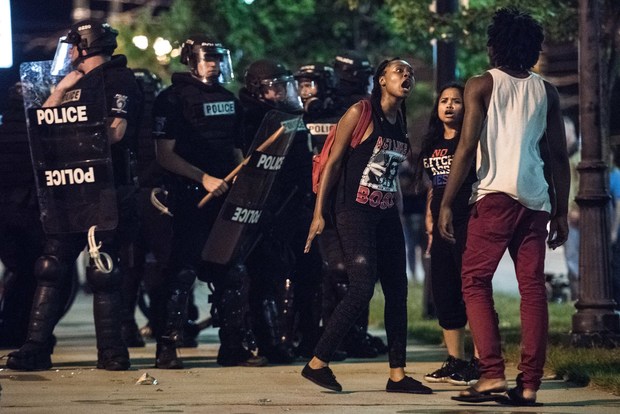 Two videos have been made public - one filmed by an officer's bodycam and another by a patrol vehicle dashcam.

The officer who shot Mr Scott was not wearing a bodycam, because not all Charlotte police tactical teams wore them, Mr Putney said.

The officer who fatally shot the father-of-seven was identified as Brently Vinson, who is also African-American.

Quizzed about claims that police were not at the location because of Mr Scott, and encountered him randomly, My Putney said: "They were intentionally detaining this man. It was to take this man off the streets."

He said that that police would release DNA evidence as well as the footage.

Asked whether any officers would be charged, he said: "No officers are being charged by me at this point, but there is another investigation underway".

The shooting is being investigated by the Federal Bureau of Investigation.

There are conflicting accounts of his death - police say he was armed and that a pistol was recovered at the scene; his family says he was holding a book.

She said he read the Islamic holy book every day, often while waiting for his son to get off the bus.

"That's what he was reading because he loved to read that book."

Critics have accused Charlotte authorities of a lack of transparency overt the delay in releasing the footage, compared with the swift action taken after a police shooting in Tulsa, Oklahoma, where a white officer has been charged.