A man is in a critical condition after being shot in a second night of protests over the fatal police shooting of a black man in the US city of Charlotte. 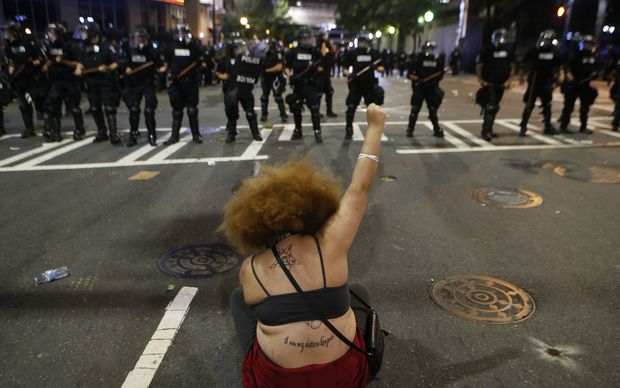 Police clash with protesters as residents and activists protest the death of Keith Scott in Charlotte, North Carolina. Photo: AFP

Riot police have lined the streets to face off against hundreds of protesters and tear gas has been fired in the North Carolina city.

One person was taken to hospital critically injured by a gunshot and at least eight more civilians and four police officers were injured.

The city said that the shooting was "civilian on civilian" violence and the police were not involved.

North Carolina officers said they repeatedly warned Mr Scott, who they said got out of his car with a handgun.

Charlotte-Mecklenburg Police Chief Kerr Putney said during a news conference he was told to drop his gun before he was shot.

Mr Scott, 43, was shot by a black officer and died at the Carolinas Medical Center.

Mr Putney said Mr Scott first got out of the car with a gun and got back in when officers directed him to drop his weapon.

As he got out again, he said, officers shot him.

"It's time to change the narrative, because I can tell you from the facts that the story's a little bit different as to how it's been portrayed so far, especially through social media," he said.

Mr Putney added that officers did not find a book at the scene, contradicting claims by Mr Scott's family that he was reading a book in his car when he was shot.

He added while it was evident Mr Scott was armed, it was unclear whether he was pointing the weapon at officers.

Officer Brentley Vinson, a two-year veteran who shot Mr Scott, has been placed on administrative leave over the incident.

Charlotte police were looking for a different suspect to serve a warrant at a block of flats when Mr Scott was killed, police spokesman Keith Trietley said. 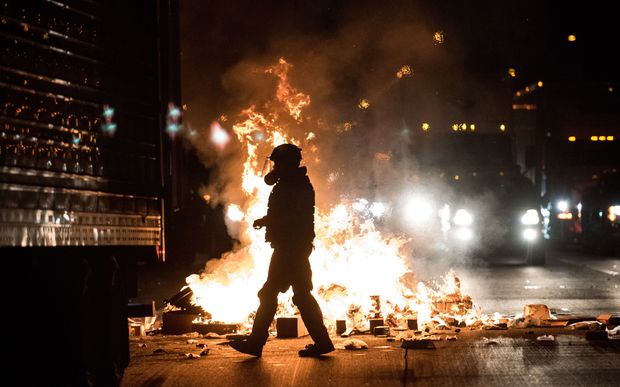 A police officer in riot gear walks past a fire on the I-85 during protests in the early hours of the morning in Charlotte. Photo: AFP

At a subsequent news conference of black leaders, a Nation of Islam leader called for an economic boycott of Charlotte.

BJ Murphy said: "We don't got nothing to lose."

Police used tear gas on dozens of protesters and arrested one in the unrest, which shut down part of Interstate 85.

Following the shooting, a woman who claimed to be Mr Scott's daughter posted a video to Facebook saying her father was unarmed and had a disability, the Charlotte Observer reports.

She claimed Mr Scott was unarmed and reading while he was waiting for his son's school bus and was struck with a stun gun before being shot four times.

Police have not responded to her claims and her account could not be immediately verified.

The protests came a day after police in the city of Tulsa, in Oklahoma, said a black man they had killed on Friday was unarmed.

The North Carolina and Oklahoma incidents are the latest in a string of police shootings that has gripped the US and led to mounting racial tensions across the country.

Mr Scott's family plans to hold a news conference later on Wednesday in the area where he was shot.