Prime Minister John Key has delivered a speech to the United Nations General Assembly ahead of the Security Council meeting on Syria he will chair tomorrow.

In his speech, Mr Key challenged the Security Council to throw its weight behind the temporary ceasefire in Syria, and put aside internal divisions to help find a long-term solution.

Tensions have been running high with investigations into two bombing attacks in Syria in the last few days. In the first, US airstrikes killed more than 60 Syrian troops, and, yesterday, a fatal attack on a UN convoy destroyed 18 lorries carrying humanitarian supplies near the besieged city of Allepo.

Mr Key told the assembly no country could solve the problems of the world alone, and urged them to make a collective effort.

"Borders are closing to people and products, to investment, to ideas. Many states are turning inwards.

"The politics of fear and extremism are gaining ground.

"Too many states are flouting the rules.

"But no country can face today's challenges alone."

And he said the UN itself must improve how it operated, and he took aim at the Security Council, the real powerhouse of the UN.

"For the vast majority of UN member states, which are dependent on a fair rules-based international system, a weak council is not an option.

"We acknowledge that the council does not have a role in every crisis. But the reality is that we need the council to respond when no one else can.

"This is why we have consistently called for council action to revive the Middle East Peace Process.

"We have also been deeply troubled to see the council, the pre-eminent body for international peace and security, fail to live up to its responsibilities on the most serious crisis of our time, Syria.

"Here the council has fallen short." 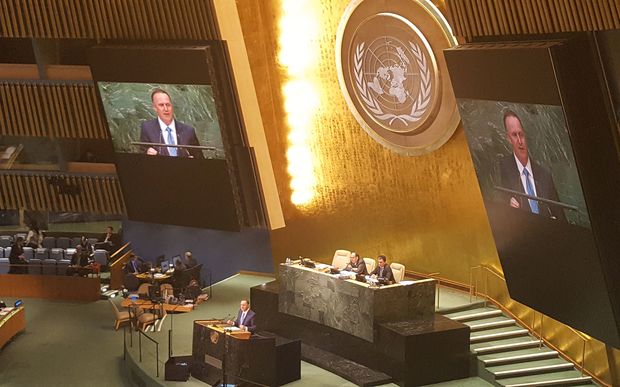 Mr Key told the assembly the internal politics within the council and the sheer complexity of the Syria crisis had obstructed a unified council response.

"But we believe that no matter how difficult and sensitive the issues, the council cannot watch the situation go from bad to worse for the Syrian people."

He said New Zealand hoped tomorrow's meeting would be a chance for the council to put its weight behind the ceasefire agreement reached between the US and Russia.

That ceasefire was the best chance the world had to put a stop to the fighting, and to get humanitarian aid to those who needed it, he said.

Mr Key also called for a strong international response, including sanctions, to the nuclear test by the Democratic People's Republic of Korea, carried out on 9 September.

"The regime's efforts to advance its nuclear and missile programmes; its callous disregard for the North Korean people - as demonstrated by the dire human rights situation in the country; and its leader's unpredictably ruthless rule have made it one of our most pressing international security threats.

"Its provocative actions show blatant disregard for Security Council resolutions and pose a grave threat to the international law.

Call for reform of P5 veto

Mr Key reiterated New Zealand's stance on the need for reform at the UN, and in particular the use of the veto by the five permanent members (P5).

"The veto plays a huge part in the council's effectiveness.

"No matter how hard we work to find compromises, time and time again we come up against the veto.

"The use of the veto, the threat of the veto. The exploitation of the veto is well beyond what the founders of the United Nations envisaged."

He also touched on trade, calling for a fair rules-based global system, and making the case for support for the Trans-Pacific Partnership trade deal.

Finally, he gave a strong endorsement for Miss Clark as the next UN Secretary General.

"This is not the time for a business as usual appointment for Secretary-General.

"We need someone who is up to the job.

"The next Secretary-General must have the courage, experience and skills necessary to lead this organisation, to keep it relevant and responsive."

He said having been up against Miss Clark in the New Zealand he knew her to be a "natural leader".

"She rallies people together to find the common ground, even when the issues are difficult and the differences vast.

"She gets things done... We think it's time for a Secretary-General like Helen Clark."

Talking to reporters afterwards, Mr Key acknowledged it was unusual to make a candidate pitch like he did for Miss Clark in his speech.

"Yeah, it is, but we have backed her from the start and we're going to back her right to the finish - we don't think it's game over at all.

"So we're starting to come to a fairly critical time."

Mr Key said they had both been "working the room" in the last few days, which included him introducing Miss Clark to the US President Barack Obama and UK Prime Minister Teresa May, both of whose countries are permanent Security Council members, with the right of veto.

Mr Key was also looking ahead to the main event - the Security Council meeting on Syria that New Zealand would chair.

He did not expect a formal resolution would be delivered as a result of the two-hour meeting, however believed both the US and Russia understood how critical it was.

"After five years of enormous cost to the Syrian people and, if this falls over, goodness knows what it would take to work.

"It's clearly not perfect, but it's the only game in town at the moment."

Mr Key said he believed the UN would resume aid supplies, following the fatal bombing of the humanitarian convoy near Aleppo.

"And I think everyone acknowledges it's a very difficult position, millions of displaced people, a huge number of people have lost their lives... It's not that the aid agencies don't want to provide support, they can't at the moment if they're at risk themselves."

Mr Key said it still was not clear who was responsible for bombing the UN convoy.

"But clearly they made a mistake, and that doesn't make it right, but looking back isn't going to give the people of Syria an answer."

The Security Council meeting has taken on heightened importance amid outrage over the strike on the convoy near Aleppo, which killed about 20 civilians.

Russia, Syria and the US have all denied their air forces were involved.

Earlier Mr Key met Iraqi leader Haider al-Abadi, who said his country would welcome any further support from New Zealand in the fight against Islamic State.

Mr al-Abadi told New Zealand reporters he and Mr Key had a positive meeting, during which they discussed New Zealand's training mission in Iraq, which has been extended until 2018.

International support was crucial in the fight against Islamic State, also referred to as Daesh, he said.

"And there was a decision to extend the stay of the New Zealand force which is helping Iraq, in terms of training especially; training is very important for us, our army has become a national army... a unifying national force in the country."

The prime minister said he would welcome any further support from New Zealand, and in particular intelligence information about foreign fighters coming to his country to fight for Islamic State. 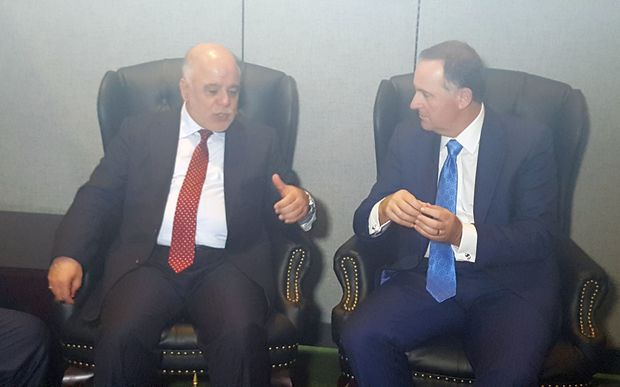 Mr al-Abadi said finding a solution to the crisis was important for Iraq, which wanted a viable regime next door.

"We are dealing at the moment with different powers there, we are dealing with the Syrian government because they are the one who's in Damascus and we hope they can extend their control to the that border between Syria and Iraq.

"It's up to the Syrian people to choose the Syrian government they want, through election, but the common purpose must be to defeat all terrorist organisations existing in Syria and there are many of them."