Air strikes have hit rebel-held parts of the Syrian city of Aleppo after the military declared the current cessation of violence was over.

The Syrian military and rebels have accused each other of repeatedly violating the truce which began seven days ago. 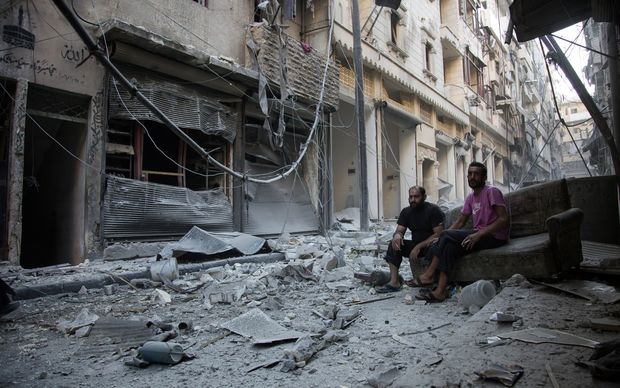 The rebel-controlled neighbourhood of Karm al-Jaba in Aleppo, hit by an air strike during the truce. Photo: AFP

The US, which brokered the deal with Russia, said it was working to extend the agreement but it called on Russia to clarify the Syrian statement.

"Our arrangement is with Russia, which is responsible for the Syrian regime's compliance, so we expect Russia to clarify their position," state department spokesman John Kirby said.

The US and Russia are to hold further talks on the Syrian situation in New York on Tuesday, the state department added.

It said the trucks had made a routine aid delivery organised by an international organisation to an area west of Aleppo city, and were hit near the town of Urm al-Kubra.

The United Nations and Red Cross said they were investigating the reports, and did not say whether the aid convoy belonged to them.

The Observatory reported 35 strikes in and around Aleppo since the truce ended and rebel-held areas in Aleppo and villages to the west had been hit.

Government-backed air strikes were also reported in the city of Homs and in the cities of Hama and Idlib.

Earlier, the Syrian military said its seven-day "regime of calm" had expired.

It said rebel groups, which it referred to as "terrorists", had failed to commit to any provisions of the truce deal.

US Secretary of State John Kerry criticised the Syrian declaration, saying: "It would be good if they didn't talk first to the press but if they talked to the people who are actually negotiating this."

He had earlier described the truce as "holding but fragile".

Russian military spokesman Lt Gen Sergei Rudskoi said in a televised statement: "Considering that the conditions of the ceasefire are not being respected by the rebels, we consider it pointless for the Syrian government forces to respect it unilaterally."

The cessation agreement included deliveries of humanitarian aid for the worst hit areas, but by Monday most shipments had yet to go in.

They include a 20-lorry convoy for rebel-held eastern Aleppo where about 275,000 civilians are trapped without access to food or medical supplies.