The ruling United Russia party is expected to win even greater dominance over Russia's lower house in a parliamentary election, showing that support for President Vladimir Putin is holding up despite sanctions and a deep economic slowdown. 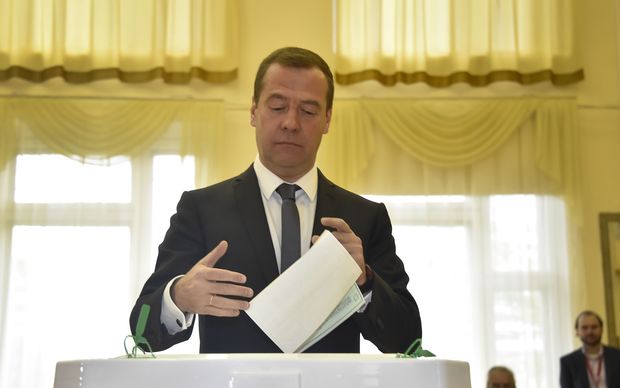 The election for the Duma, or lower house, is being seen as a dry run for Putin's expected presidential campaign in 2018.

It is also a test of how well the Kremlin can oversee trouble-free elections. It will be the first parliamentary vote since 2011, when allegations of ballot-rigging sparked big protests against Putin in the capital.

Voting got under way on the Chukotka Peninsula opposite Alaska at 8am local time on Sunday (8am NZ time), and will wrap up in Kaliningrad, Russia's most westerly point, where people could cast their vote until 8pm on Sunday (6am NZ time).

United Russia, led by Putin loyalist Prime Minister Dmitry Medvedev, has 238 of 450 Duma seats, dominates the more than 80 regional parliaments, and is routinely depicted in a favorable light by state television, where most Russians get their news.

The party is also able to draw on the support of the other three parties in the federal Duma, and benefits from its association with 63-year-old Putin, who after 17 years in power as either president or prime minister, enjoys a personal approval rating of about 80 percent.

By contrast, liberal opposition politicians, who have just one sympathetic member in the Duma, complain they are starved of air time, vilified by state media, and their campaigns systematically disrupted by pro-Kremlin provocateurs. Pro-Kremlin politicians deny that charge.

The liberal opposition hopes it can break through to win about two dozen seats. Pollsters sat it will be lucky to snag a handful and may end up with none.

The vote will be closely watched to see how many of Russia's roughly 110 million registered voters across its 11 time zones in what is the world's largest country turn up to cast their ballots, with some opinion polls showing apathy levels are high.

Putin has said it is too early to say if he will go for what would be a fourth presidential term in 2018. If he did and won, he would be in power until 2024, longer than Soviet leader Leonid Brezhnev.

Anxious to avoid a repeat of 2011's street protests, Kremlin officials have tried to assure Russians that the vote will be the cleanest in the country's modern history.

Observers from the Organization for Security and Co-operation in Europe are being allowed to monitor the vote, a new head of the central election commission has been appointed, and regional and Kremlin officials have been fired in the run-up.

The authorities have also resurrected an old voting system viewed as more equitable, which means that half of parliament will be decided by people voting for individuals with the other half drawn from party lists. The last parliament was elected on party lists alone.

Polls show United Russia's popularity has been somewhat dented by a grinding economic crisis caused by a fall in global oil prices and compounded by Western sanctions over Moscow's role in the Ukraine crisis.

But they also show that Putin's own popularity remains high and that many voters buy the Kremlin narrative that is frequently repeated on state TV, of the West using sanctions to try to wreck the economy in revenge for Moscow's 2014 annexation of Ukraine's Crimea.