North Korea's fifth nuclear test, which was more powerful than the Hiroshima bomb, is a clear violation of United Nations resolutions, the international body says. 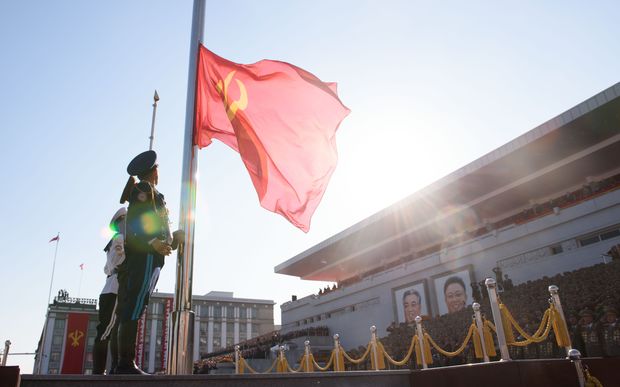 North Korea claims to have carried out its fifth nuclear bomb test, after magnitude 5.3 seismic activity was detected close to its test site.

The UN nuclear watchdog said the nuclear test by North Korea was a "clear violation of numerous United Nations Security Council resolutions" and disregarded repeated demands from the international community.

The report on North Korean state television said the test was to measure the strength of its nuclear warhead.

"Our ... party sent a congratulatory message to our nuclear scientists."

It was North Korea's fifth nuclear test and the blast was more powerful than the bomb dropped on Hiroshima.

North Korea said it had mastered the ability to mount a warhead on a ballistic missile.

"The standardisation of the nuclear warhead will enable the DPRK [North Korea] to produce at will and as many as it wants a variety of smaller, lighter and diversified nuclear warheads of higher strike power."

The US Geological Survey said the tremor had been detected in the north-east of North Korea, close to a known nuclear test site.

South Korea's Yonhap news agency had earlier said it had been an "artificial quake", with an unnamed government source saying it was highly likely to have been a nuclear test.

Recent satellite imagery and intelligence has indicated increased activity at the Punggye-ri site, where North Korea carried out its fourth nuclear test in January.

The country is banned by UN sanctions from any tests of nuclear or missile technology.

But in recent months it has conducted a series of missile launches and has threatened to carry out nuclear attacks on its enemies.

Friday is North Korea's National Day, which celebrates the start of the country's leadership regime.

After the announcement, the US White House said President Barack Obama was in talks with South Korea and Japan.

The White House said the president "reiterated the unbreakable US commitment to the security of our allies in Asia and around the world".

"The President indicated he would continue to consult our allies and partners in the days ahead to ensure provocative actions from North Korea are met with serious consequences."

It warned Pyongyang against any activity that would worsen the situation on the Korean peninsula.

North Korea often uses such events as an opportunity for a show of military strength.

North Korea analyst Jeffrey Lewis, at the Middlebury Institute of International Studies in the US, told Reuters the size of Friday's tremor indicated a device with a 20 to 30 kilotonne yield.

If confirmed, that would be the North's largest device to date.

But in recent months it has conducted a series of ballistic missile launches and has threatened to carry out nuclear attacks on its enemies.

Its last nuclear test, in January, was purported to be of a hydrogen bomb, but that claim has not been confirmed.