Images of a teenage prisoner with a spit hood over his head at a Brisbane jail have been published by an Australian newspaper, prompting renewed calls for 17-year-olds to be taken out of adult prisons in the state.

The 17-year-old was on remand in the Brisbane Correctional Centre at Wacol when the incident happened in 2013.

The images published in Queensland's The Courier-Mail showed the boy was restrained with handcuffs attached to a body restraint. He was reportedly left alone for an hour with a spit hood over his head. 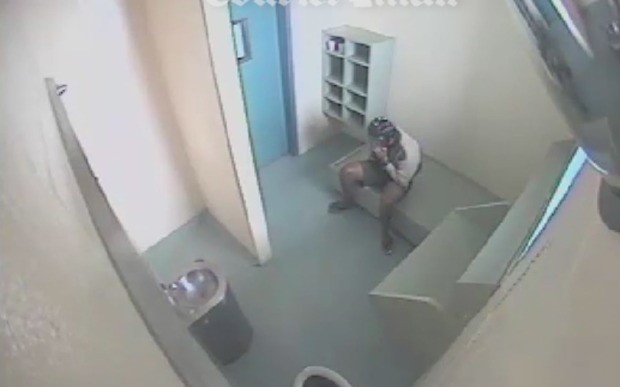 The images published by The Courier-Mail show the boy with a spit hood on his head and restrained with handcuffs. Photo: SCREEN SHOT / The Courier Mail

The State Government had previously condemned similar treatment of young offenders in the Northern Territory, but insisted spit hoods were not used in Queensland youth detention facilities.

A spokesman for Attorney-General Yvette D'Ath said while the State Government was moving towards removing 17-year-olds from adult prisons, there was no timeframe.

Australian treatment of detained teenagers was already under the spotlight after images of a teenager hooded and tied to a chair were broadcast during an ABC Four Corners investigative report.

The investigation also uncovered video of six children held in isolation in the Northern Territory being sprayed with tear gas in August 2014. 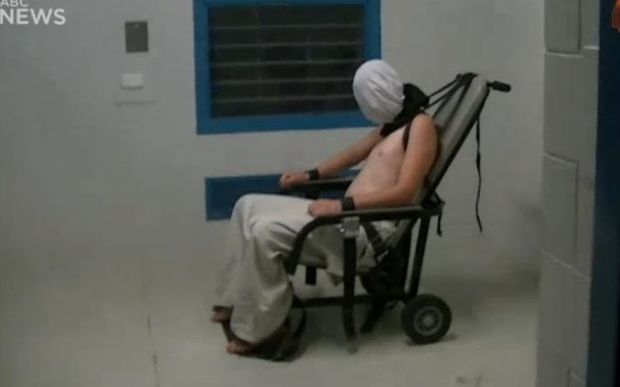 Barrister and Youth Advocacy Centre chairman Damien Atkinson said it was outrageous children were still being detained in adult jails.

"I'd like to bring Queensland into line with every other state in Australia and say when you're 17, you're still a child," he said.

"Prisons and prison officers aren't equipped to deal with young people and our government in defending our children to adult prisons.

"It's much worse in somewhere like Lotus Glen [Correctional Centre in far north Queensland] - they have to mix with the adult prison population."

'Law could be changed this week'

"We're the last jurisdiction in this country that actually locks up 17-year-old children in adult prisons," she said.

"The law must change - they are children - the United Nations has stated that they're children and there's been a number of negative reports from the UN.

"It's time for Queensland to get into line with every other jurisdiction in the country."

"It's not about policy, it's about law - they're in Parliament this week - the law could be changed this week," he said.

"It's time for the Labor Government to step up and protect 17-year-old children in adult prisons and get them out of there."

Ms D'Ath ordered a review into allegations of abuse at the Cleveland Youth Detention Centre in Townsville earlier this month.

The decision followed the prime minister's decision to set up a royal commission into abuse in the Northern Territory's juvenile justice system after the ABC TV Four Corners investigation.

In the days after the Four Corners investigation aired in July, Ms D'Ath said there was "no evidence of systemic problems or abuse in Queensland [youth detention centres]".