Iraq has hanged 36 men convicted over the killing of up to 1700 military recruits at a former US base in 2014. 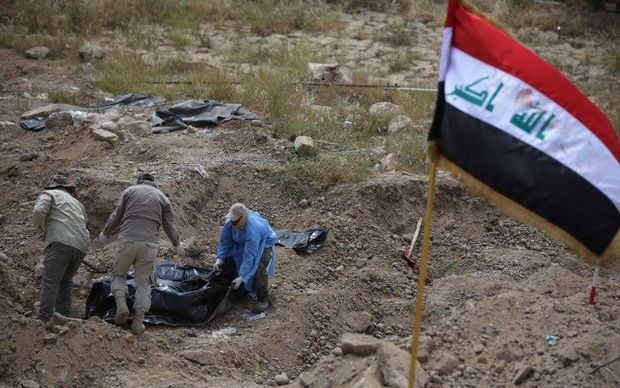 Members of the Iraqi security forces inspect a mass grave at the Speicher Camp. Photo: AFP

The massacre at Camp Speicher, near Tikrit, was carried out by fighters from Islamic State (IS) as it seized territory across northern Iraq.

Outrage over the massacre of the mostly Shia cadets helped mobilise Iraq's Shia militias in the fight against IS.

The violent extremist group released photos and video documenting the massacre in 2014. Mass graves were found a year later.

The graves were discovered when Iraqi government forces recaptured the area.

"The executions of 36 convicted over the Speicher crime were carried out this morning in Nasiriyah prison," a spokesman for the governor's office in Dhiqar, the province of which Nasiriyah is the capital, told AFP news agency.

Some 400 of the army recruits who died were from Dhiqar province.

The spokesman said that Justice Minister Haidar al-Zamili was present at the executions.

Prime Minister Haider al-Abadi had said after last month's Baghdad bomb blast that killed more than 300 people that he wanted to speed up executions of terrorism convicts.

Those executed on Sunday, all believed to be Iraqi citizens, had been sentenced to death in February.

Some of the defendants said they had not been near Tikrit at the time of the massacre, while others said they had been denied access to lawyers, or had been forced to confess under torture.

Camp Speicher, named after the first US casualty of the 1991 "Desert Storm" Gulf war against Iraq, had been full of Iraqi army recruits.

The camp surrendered after it was surrounded by jihadists.

Among the thousands of captives, Shia men were bound and taken away in lorries. They were then forced to lie face down on the ground before being shot dead. Their bodies were dumped in prepared trenches.

The IS group revelled in the atrocity, posting on the internet videos and pictures showing the Shia prisoners being taken away and shot.