Republican Donald Trump has sparked anger by appearing to suggest his supporters could stop his rival Hillary Clinton by exercising their gun rights. 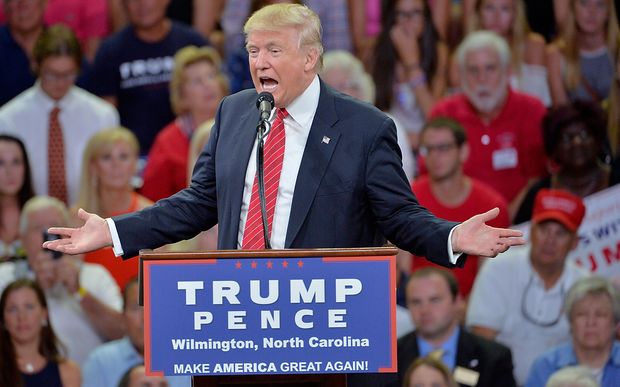 He said that Mrs Clinton would put liberal justices on the Supreme Court if she won the presidency in November, threatening gun ownership rights.

Speaking at a rally in North Carolina, Mr Trump hinted that gun rights advocates could stop her taking power.

That sparked an online backlash, many accusing him of inciting violence.

He replied that he was only urging gun rights supporters to vote in large numbers.

The remarks that sparked the firestorm were made at a rally in Wilmington on Tuesday afternoon.

The Republican presidential nominee said of his Democratic opponent: "Hillary wants to abolish, essentially abolish the Second Amendment. By the way, and if she gets to pick her judges, nothing you can do, folks.

"But the Second Amendment people, maybe there is, I don't know."

The Second Amendment enshrines the right to bear arms in the US Constitution.

Twitter users were quick to respond to Mr Trump's comments, criticising the Republican nominee for appearing to encourage gun violence.

This isn't play. Unstable people with powerful guns and an unhinged hatred for Hillary are listening to you, @realDonaldTrump.

Don't treat this as a political misstep. It's an assassination threat, seriously upping the possibility of a national tragedy & crisis.

But Mr Trump was quick to respond, tweeting that he was referring to the political power of gun rights advocates.

Media desperate to distract from Clinton's anti-2A stance. I said pro-2A citizens must organize and get out vote to save our Constitution!

His campaign said: "Second Amendment people have amazing spirit and are tremendously unified, which gives them great political power."

"And this year, they will be voting in record numbers, and it won't be for Hillary Clinton, it will be for Donald Trump."

And former New York City mayor Rudy Giuliani backed Mr Trump, saying it clearly was not a threat but the press was involved in a "conspiracy to elect Hillary Clinton".

Some Trump supporters leaving the rally in Wilmington told CNN they were not concerned by the remarks because they were clearly a joke and they liked the fact he spoke off-the-cuff.

The National Rifle Association also backed Mr Trump and warned Mrs Clinton would pick judges that would not uphold the Second Amendment.

Mrs Clinton has made tightening some gun laws part of her campaign but there is no evidence that she wants to abolish the right to bear arms.

A spokeswoman for the Secret Service said the agency was aware of Mr Trump's comments but refused to answer additional questions.

Mr Trump's remarks come after eight days of negative headlines, controversial remarks and some leading Republicans saying they cannot vote for him in November's presidential election.