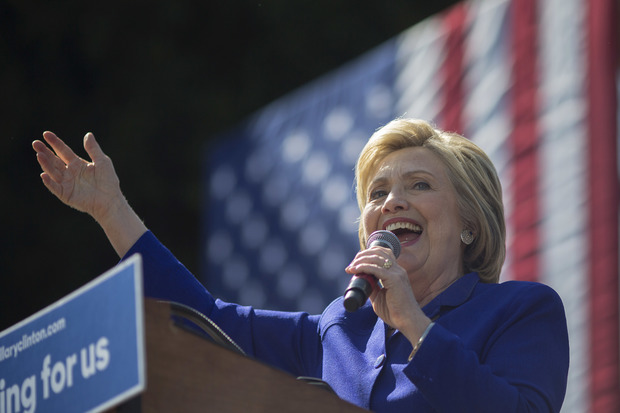 She has been endorsed at the Party's national convention in Philadelphia.

Delegates from South Dakota gave Mrs Clinton 15 votes, ensuring that she had more than the 2383 votes needed to win the nomination during a state-by-state roll call at the Democratic convention in Philadelphia.

After a tough battle with Democratic rival US Senator Bernie Sanders, Mrs Clinton is now the party's standard-bearer against Republican nominee Donald Trump in the 8 November election.

In a symbolic gesture of party unity, Mr Sanders took the microphone and spoke from the convention floor to move to suspend the procedural rules and declare Mrs Clinton as the nominee by acclamation.

The chair of the Democratic National Committee, Congresswoman Marcia Fudge, approved the motion after a unanimous voice vote and members of the crowd erupted into cheers as they held up new Clinton signs.

"Yes, we do break barriers, I broke a barrier when I became the first Democratic woman elected to the Senate in her own right," Mikulski said.

"So it is with a full heart that I'm here today to nominate Hillary Clinton to be the first woman president," Mrs Mikulski said.

Mrs Clinton's nomination comes after some of Mr Sanders' supporters protested on the first day of the convention against the party leadership's apparent backing of her during the bitter Democratic primary fight.

On Tuesday night, sections of the convention hall were left conspicuously unpopulated night as delegates from strongly pro-Sanders delegations, including California, walked out after Mr Sanders moved that Mrs Clinton be named the nominee.

Supporters of Mrs Clinton say her Washington credentials show she has the experience needed for the White House during troubled times as the United States tries to speed up its economic recovery and faces security challenges abroad.

Detractors view her as too cosy with the establishment and say she carries political baggage dating back to the start of her husband President Bill Clinton's first White House term in the 1990s.

Hillary Clinton will now go to head-to-head against Republican presidential nominee Donald Trump who has just posted a two-point lead over Mrs Clinton in the latest Reuters/Ipsos opinion poll. It is the first time he has been ahead since early May.