Former Prime Minister Helen Clark is reported to be falling behind other contenders in the vote for UN Secretary-General. 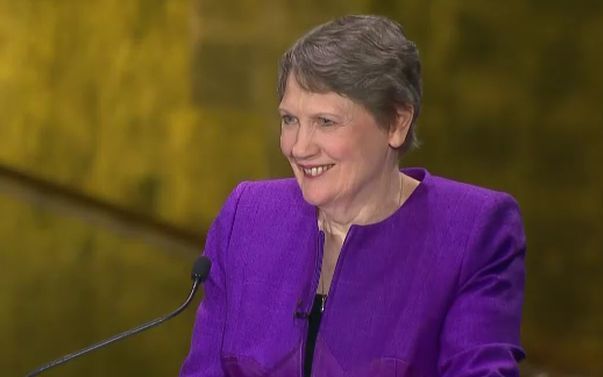 Helen Clark taking part in a televised debate with other candidates for the job of to be UN Secretary-General. Photo: Screenshot / UN webcast

The United Nations Security Council has held its first secret ballot in a bid to whittle down the 12 candidates vying to be the next Secretary-General, but despite attempts to make the process more transparent the results will not be made public.

Secretary-General Ban Ki-moon steps down at the end of 2016 after two five-year terms.

RNZ's UN correspondent Lorna Shaddick said from New York that it was being widely reported Miss Clark had come in 6th place.

"The results of this are not meant to be made public and they are not being officially made public by the UN but the straw poll, as its called, which took place this morning US time - the results have been tallied [and] they do show that Helen Clark came very much in the middle of the pack, in sixth place altogether.

"And I think it's those discourage ones which are particularly significant because of course it's the five of the members of the security council [who] do have vetoes and that might indicate that later on some might vote to veto her if she continues her candidacy."

It was not certain which nations would have those vetoes but because of the informal rule called "Buggins' Turn", by which the Secretary General position is shuffled around between the areas of the world, it seemed there was a push to have an Eastern European candidate in the role.

However, former Portuguese Prime Minister Antonio Guterres who was also the UN High Commissioner for Refugees for 10 years, was reported to be coming out on top.

Each candidate has been told how they did as well as the overall highest and lowest scores. It would then be up to the candidates to decide whether to drop out or stay in the running.

The 193-member UN General Assembly this year sought to lift a veil of secrecy that has surrounded the election of the UN chief for the past 70 years by requiring public nominations and holding campaign-style town hall events with each candidate.

However, it will be the 15-member Security Council which will choose a candidate to recommend to the General Assembly for election later this year.

The council will continue to hold closed-door informal secret ballots until they reach consensus. It's hoped the final candidate will be selected by October.

The UN has been using the polls since 1981 to give an indication of how viable each candidate is before a formal ballot is held.

On Thursday, council members were given a ballot for each candidate with the options of encourage, discourage and no opinion.

The nominating states will be told of the results for their candidate, but overall results will not be made public.

The search for a successor to Ban, a former South Korean foreign minister, has sparked a push by more than a quarter of the 193 UN states for the world body's first female leader, and half of the current candidates are women. The council hopes to agree on a candidate by October, diplomats say.