United States President Barack Obama has urged the US to "reject despair" as he paid tribute to five police officers killed during a deadly sniper attack in Dallas. 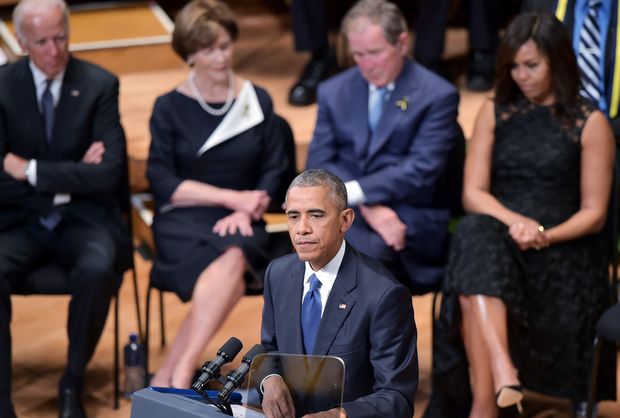 US President Barack Obama speaks during an interfaith memorial service for the victims of the Dallas police shooting. Photo: AFP

He told a memorial service in the city the United States must "try to find some meaning amidst our sorrow" and the nation could unite.

His trip came amid mounting racial tensions across the country.

Micah Johnson killed the Dallas officers at a protest held over the recent police shootings of African Americans in Minnesota and Louisiana.

Before he was killed by police, Mr Johnson said he was angry about the shootings.

Meanwhile, protests over excessive police force against black Americans have been held in cities across the US.

Americans are struggling with what has happened in the past week, he said, and events appeared to have revealed "the deepest fault line of our democracy".

"I'm here to say we must reject such despair. I'm here to insist that we are not as divided as we seem." 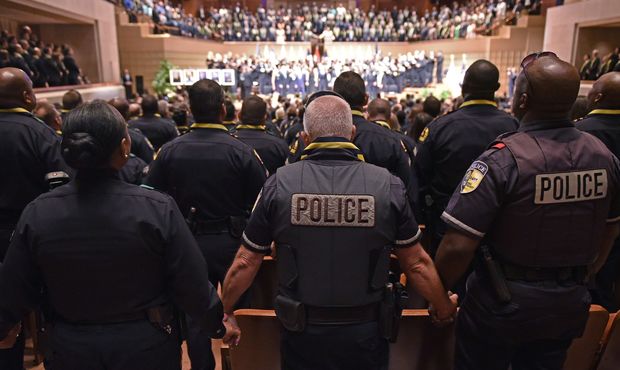 Police join hands during the singing of The Battle Hymn of the Republic. Photo: AFP

He honoured the bravery of police officers and said fewer people were being mourned at the service because of the courage of the officers killed.

The service featured five portraits of the officers and five empty chairs.

"Their courage is our protection and shield," he said.

And Dallas Mayor Mike Rawlings, who spoke first, said: "The soul of our city was pierced."

First Lady Michelle Obama, Vice President Joe Biden and his wife, Jill, will also meet privately with the families of the victims on Wednesday. 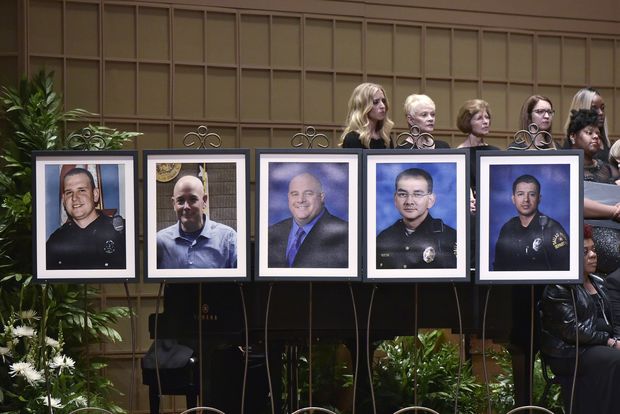 Photos of the victims of the Dallas police shooting. Photo: AFP

Dallas police ramped up security ahead of the president's visit, enlisting help from the Arlington Police Department to work with Secret Security.

The US has been on edge in the wake of the recent string of violence, with protests over police reform and race relations roiling across the country.

Mr Obama and Mr Biden on Monday met with law enforcement officials to discuss police reform and how to repair relations between police officers and the communities they protect.

The president, who cut short a trip to Europe over the recent violence, is expected to host a similar meeting on Wednesday in Dallas with law enforcement as well as local leaders and activists. 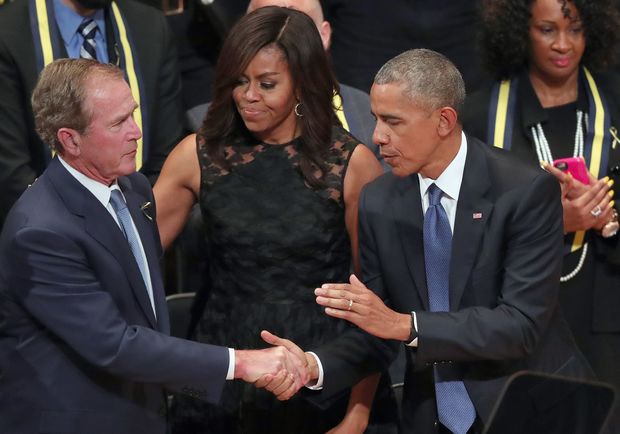