The latest 10-year outlook from the OECD warns the recent period of high agricultural commodity prices is most likely over. 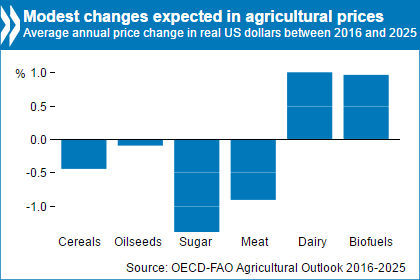 The report, produced with the Food and Agriculture Organisation, said overall market growth was projected to slow and agricultural trade was expected to grow at less than half the rate of the previous decade.

The report - 'OECD-FAO Agricultural Outlook 2016-2025' - said global agricultural trade was expected to grow by 1.8 percent per annum in volume during the next 10 years.

That compared to an annual growth rate of 4.3 percent per year over the past decade.

It said that in developing countries, consumption of dairy products was expected to increase by 20 percent over the projection period.

It also noted a reduction in the dairy herd in New Zealand and adverse weather conditions such as drought was expected to reduce milk production by 6.8 percent this year.

It said overall EU exports for milk commodities were expected to increase by nearly 58.5 percent in the coming decade, driven by increased milk production and limited growth in domestic consumption.

The report said the outlook for the meat market remained strong.

It said global meat production was projected to be 16 percent higher in 2025 compared with the base period of 2013-2015.