Brexit - Nigel Farage has announced he is standing down as leader of the UK Independence Party. 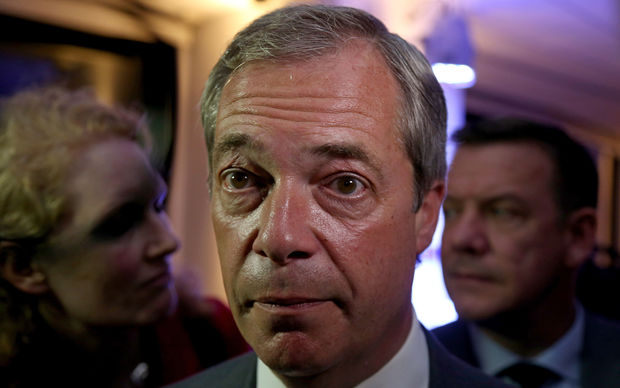 Mr Farage said he had "done my bit" following the UK's referendum vote to leave the EU.

He said the party was in a "pretty good place" and he would not change his mind about quitting as he did after the 2015 general election.

Leading UKIP was "tough at times" but "all worth it" said Mr Farage.

Mr Farage said the party would campaign against "backsliding" on the UK's exit from the EU, saying he planned to see out his term in the European Parliament - describing his party as "the turkeys that voted for Christmas".

He said his party's "greatest potential" lay in attracting Labour voters, adding that he would not be backing any particular candidate to replace him.

"May the best man or woman win," he said.

Mr Farage said he would "bury the hatchet with anybody" including UKIP's sole MP Douglas Carswell, who tweeted an emoji picture of a smiley face as the leader's resignation was announced.

The two have repeatedly clashed and tensions rose when they backed rival Leave campaigns ahead of the referendum.

Mr Carswell said Mr Farage had "played a role" in the EU referendum, but said his departure represented a "huge opportunity" for the party.

He described the chances of him running for leader as "somewhere between nil and zero" and said the winning candidate had to "steer UKIP away from the temptation of becoming an angry, nativist party."

Mr Farage announced his decision to stand aside in a speech in London, saying: "I want my life back, and it begins right now."

He has been leader of UKIP for most of the past eight years, standing down briefly in 2009 and being re-elected the following year.

He said he would quit after failing to win his seat at last year's general election, but stayed on after the party rejected his resignation.

David Cameron resigned as prime minister last month after the UK voted to leave the EU.