Police and firefighters in Rio are protesting not being paid wages and a lack of essentials like toilet paper and fuel for vehicles.

Along with the relatives carrying flowers and taxi drivers waiting with name boards there were lines of off-duty police with banners that had a far more ominous message: "Welcome to Hell". 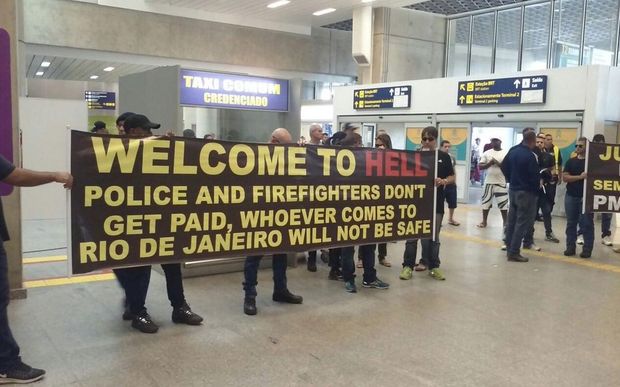 "Police and firefighters don't get paid," the banners, in English and Portuguese, went on.

"Whoever comes to Rio de Janeiro will not be safe". Photos of the protest have been widely shared on social media and in the Brazilian press.

Elsewhere in the city police staged other demonstrations against the late payment of salaries and a lack of basic necessities like car fuel and toilet paper.

About 300 police officers dressed in black stood on the steps of the Rio de Janeiro state assembly. 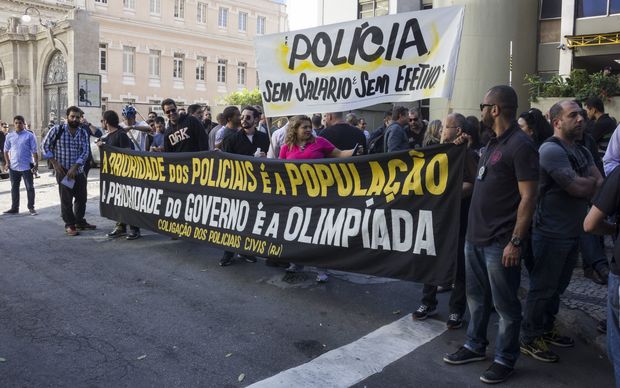 Rio de Janeiro police strike in protest at not being paid wages and a lack of essentials like fuel for vehicles. Photo: AFP

The message was echoed by Francisco Dornelles, the acting governor of Rio de Janeiro, who told the Brazilian newspaper O Globo the state was still waiting on the promised $860m payout from the federal government ahead of the start of the games. He added that without the cash injection, police patrols could be halted due to the lack of funds for basics like car fuel.

The police protests were one more symptom of the political and economic woes which engulfed Brazil and threatened to overshadow the Olympic Games set to be held in the city in August.

Brazil's Senate suspended the country's President Dilma Rousseff, and then began impeachment proceedings against her over accusations that she manipulated the government budget ahead of her 2014 re-election campaign. 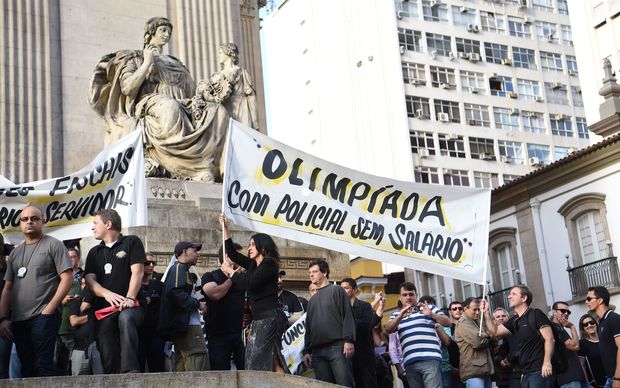 On the economic front the picture isn't much prettier. By the first quarter of 2016, government figures showed that Brazil was experiencing its worst recession in 25 years. The Gross Domestic Product of the country shrank 5.4 percent in comparison with the same period last year.

Meanwhile unemployment between February and April of this year grew to 11.2 percent from 9.5 percent. Average monthly wages also fell to just R$1962 ($NZ843).

The Olympic organising committee was also dealing with the news two more famous sportspeople - including golf world number one Jason Day - had withdrawn from the Games because of fears about the Zika virus.

However, the chief executive of the games said that concerns about the virus affecting the Olympics had been "blown out of the proportion".