Baltimore police officer Caesar Goodson has been found not guilty in his trial for the murder of black detainee Freddie Gray. 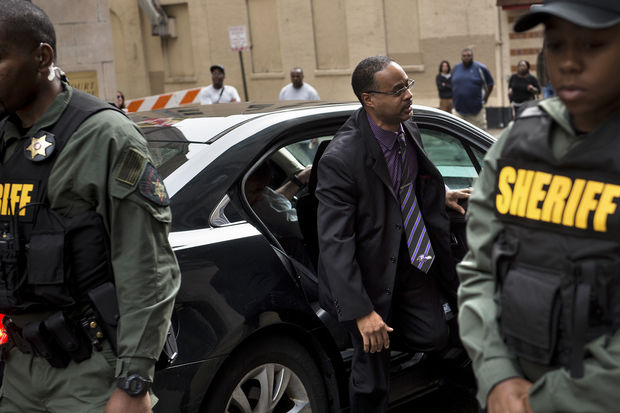 He was cleared on a second-degree "depraved heart" murder charge, the most serious charge sought against the six officers charged in the case.

Mr Goodson drove the van in which Mr Gray rode before he died.

The verdict is a blow to prosecutors, who have yet to win a conviction connected to Mr Gray's death.

Mr Gray, 25, was arrested in April 2015 for running away from police officers. He died a week after sustaining a spinal injury while in the back of a police van.

His death sparked civil unrest in Baltimore, part of a wider national debate on police brutality and the death of unarmed black men at the hands of police.

The judge said the state had failed to show that Mr Goodson was aware he had injured Mr Gray or that he needed medical care. 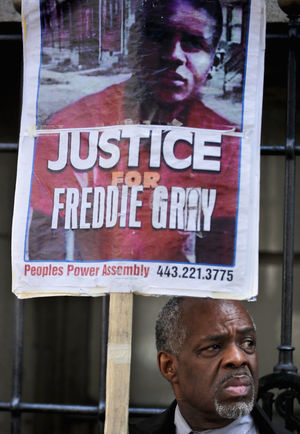 A demonstrator waits for an announcement in the trial of another officer implicated in the death of Mr Gray. Photo: AFP

Prosecutors had argued that Mr Goodson was criminally negligent when he failed to use a seat belt to secure Mr Gray and intentionally gave him a "rough ride" while transporting him to the police station.

The van made six stops during the ride to the police station. Mr Goodson was the only officer present at each of the stops.

"The state had a duty to show the defendant corruptly failed in his duty, not just that he made a mistake," the judge said in his ruling.

The same judge cleared another officer on misdemeanour charges in May and declared a mistrial in December after a jury failed to agree on charges relating to Mr Gray's death.

Mr Goodson hugged and shook hands with supporters and family members, including the officer acquitted in May, the Baltimore Sun reported.

Balitmore Sun reporter Jessica Anderson tweeted there was about a dozen protesters outside the courthouse who began marching toward police headquarters after the verdict.

Protesters walking along The Block, toward police headquarters pic.twitter.com/1JWM3ybSGZ

Baltimore Mayor Stephanie Rawlings-Blake made a statement via Twitter, saying Mr Goodson would face an administrative review and asked citizens to be patient.

The NAACP, one of the leading US civil rights groups, also called the verdict a "wake-up call for Baltimore".

Gray's death is a tragedy not found to be a crime in court, but a wakeup call for Baltimore. Not a day of rejoice for anybody. #GoodsonTrial

The Baltimore police dept, & depts across the country, must continue work with the USDOJ to get protocols in order & build community trust.