Police are trying to enforce a curfew on the streets of Baltimore, a night after violence rocked the city. 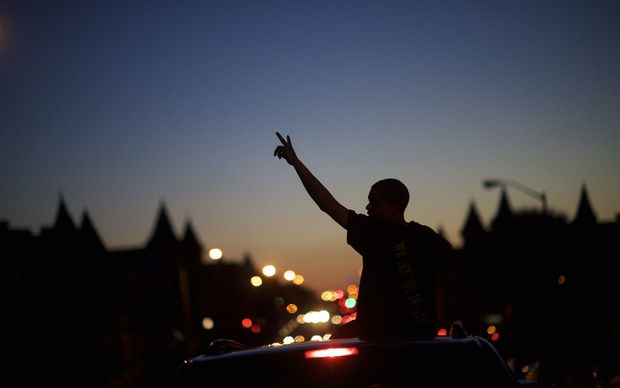 Young people in cars drive towards a phlanx of Baltimore riot police honking their horns and raising their hands with peace signs the night after citywide riots. Photo: AFP

After an evening of largely peaceful protests, a few hundred people defied the deadline of 10pm.

Thousands of police and troops were on the city streets and some fired gas canisters to disperse the crowds.

The protests have gone on daily since the death of African American man Freddie Gray in police custody on 19 April but on Monday there were street battles and arson. The rioting came after Mr Gray's funeral.

But on the following night, there was a different atmosphere on the streets.

The BBC's Tara McKelvey, at East Lexington and North Gay Street, said there was a "street party" feel, with music and car horns sounding.

The National Guard has been sent to Baltimore to stop unrest for the first time since 1968, when some of the city's neighbourhoods went up in flames after the assassination of the Reverend Martin Luther King Jr.

About 200 people were arrested on Monday as more than 100 cars were set alight and 15 buildings destroyed. 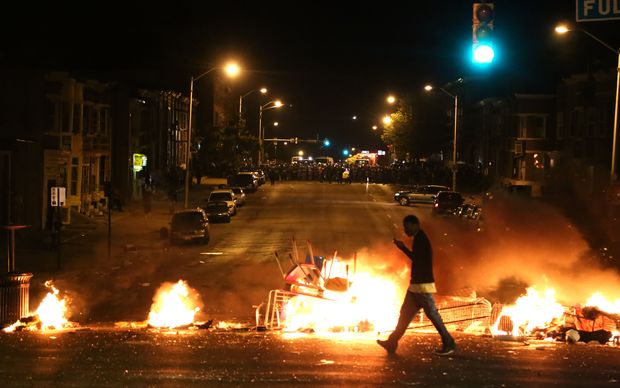 'Mom of the year'

A mother who was filmed smacking her rioting son, instantly becoming an overnight celebrity, has spoken out about her widely praised actions.

Toya Graham, who some are calling "mom of the year", received praise on social media and from Baltimore Police Commissioner Anthony Batts.

"He knew he was in trouble," Ms Graham told CBS News. "I'm a no-tolerant mother. Everybody that knows me, knows I don't play that."

But he described the issues behind the protests - the use of force by police against African American men - as a "slow-rolling crisis".

The person hoping to follow him in the White House, fellow Democrat Hillary Clinton, also spoke out, calling it "heartbreaking".

"We have to restore order and security," she told a fund-raising event in New York.

"But then we have to take a hard look as to what we need to do to reform our system.''

Gray, 25, died after suffering unexplained injuries to his spinal cord and spending a week in a coma.

Officials have suspended six police officers who were involved in the case, and an internal review will publish its findings later this week.

His death is the latest in a string of high-profile cases where black men have died after contact with the police.

A so-called solidarity demonstration took place on Tuesday evening in Chicago to show unity with Baltimore.