South African Olympic athlete Oscar Pistorius must pay for killing his girlfriend, her father has told a judge, breaking down in tears.

He was found guilty of murdering Reeva Steenkamp after a court overturned an earlier manslaughter verdict.

The sentencing hearing - expected to conclude by Friday - will decide if he will face a jail term of 15 years.

Barry Steenkamp asked for photos of his daughter's body to be made public so people could see the wounds.

Pistorius, a six-time Paralympic gold medallist whose legs were amputated below the knee as a baby, made history by becoming the first amputee sprinter to compete at the Olympics, in 2012, running on prosthetic "blades".

Mr Steenkamp's voice broke and tears streamed down his face as he said that he thought about his daughter "morning, noon and night... every hour".

The 73-year-old told Pretoria's High Court that he had had no contact with Pistorius, but said that wife June had been able to forgive the double-amputee athlete.

"You must understand why forgiving doesn't exonerate you from the crime you committed," he said.

Mr Steenkamp also told the court how the couple had been left in financial "dire straits" after their daughter's death.

Their landlady had served them with an eviction notice two weeks afterwards - which was why they had initially accepted monthly payments of 6500 rand (NZ$600) from Pistorius.

This was meant to have been confidential and he said he was "disgusted" that Pistorius' legal team had brought it up during the trial. 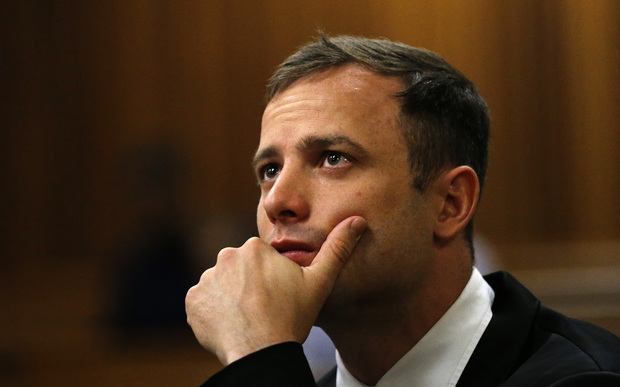 When questioned by Pistorius' lawyer, Barry Roux, Mr Steenkamp confirmed that he and his wife had declined an offer to meet the athlete.

"The time will come and I would like to talk to Oscar," he said.

Pistorius, 29, killed Ms Steenkamp in the early hours of Valentine's Day in 2013 after firing four times through a locked toilet door.

The athlete has always maintained he believed he was shooting at an intruder.

He was initially jailed for manslaughter in 2014 and was released into house arrest after a year, but his conviction was changed to murder after the prosecution appealed.

Pistorius was released from prison last October and allowed to serve out the remainder of his initial sentence under house arrest at his uncle's property in Pretoria.