The United States and other world powers have said they are ready to arm Libya's UN-backed unity government to help it fight Islamic State. 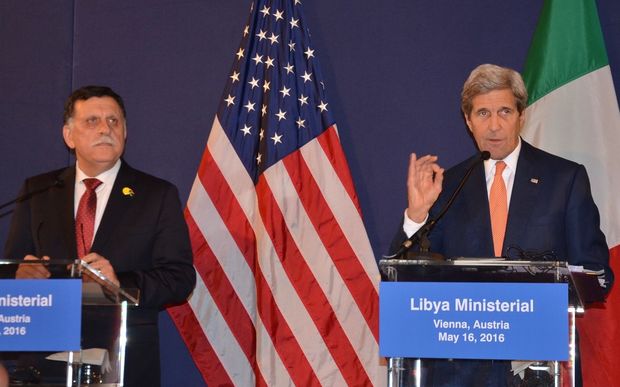 Prime Minister of Libya Fayez al-Sarraj stands by as US Secretary of State John Kerry delivers a speech after the ministerial meeting on Libya in Vienna, Austria. Photo: AFP

Speaking in Vienna, US Secretary of State John Kerry said world powers would back Libya in seeking exemption from a UN arms embargo.

He said IS was a "new threat" to Libya and it was "imperative" it was stopped.

Last month, the Libyan government warned that IS could seize most of the country if it was not halted soon.

"The GNA [Government of National Accord] is the only entity that can unify the country," Mr Kerry said after holding talks with international partners.

"It is the only way to ensure that vital institutions ... fall under representative and acknowledged authority."

"It is the only way to generate the cohesion necessary to defeat Daesh [IS]."

Mr Kerry said support for arming the government was part of a package of measures agreed at the meeting, which included accelerating non-military aid to Libya.

He said that as well as countering IS, the GNA should take full control of Libyan ministries, backed by the international community.

A joint statement from the countries attending drew attention to Libya's role as a major transit point for migrants trying to reach Europe.

"We look forward to partnering with the GNA and neighbouring countries to tackle the threat posed throughout the Mediterranean and on its land borders by criminal organisations engaged in all forms of smuggling and trafficking, including in human beings," it said.

"We are ready to respond to the Libyan government's requests for training and equipping the presidential guard and vetted forces from throughout Libya."

But the prime minister of Libya's unity government, Fayez Sarraj, warned major challenges lay ahead, saying taking on IS would require further outside help.

"We urge the international community to assist us," he said.

The North African country has been in chaos since Nato-backed forces overthrew long-time ruler Muammar Gaddafi in October 2011.

Until recently it had two rival governments competing for power, and there are still hundreds of militias, some allied to IS.

Western nations hope the unity government will take on IS, which has a foothold in Sirte - the home town of Gaddafi.

The militant group has launched a series of suicide bombings and attacks on oil facilities in the country.