British Prime Minister David Cameron has been caught on camera telling the Queen that Nigeria and Afghanistan are "fantastically corrupt", on the eve of hosting leaders from both countries at an anti-corruption summit in London. 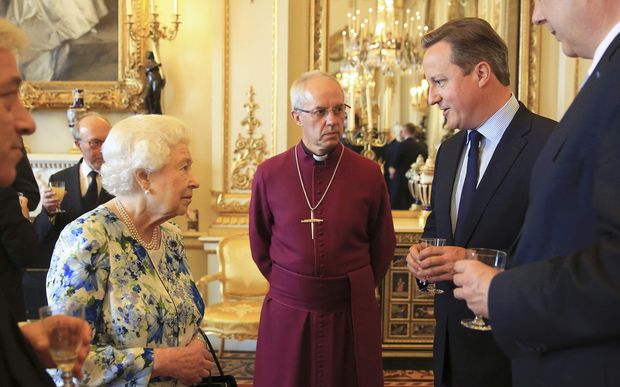 Nigeria's president, who came to power last year vowing to fight corruption, said he was "shocked" by the remarks.

After Mr Cameron's comments, Archbishop of Canterbury Justin Welby intervened to say: "But this particular president is not corrupt... he's trying very hard," before Speaker John Bercow said: "They are coming at their own expense, one assumes?"

The conversation took place at Buckingham Palace at an event to mark the Queen's 90th birthday.

Afghanistan was ranked at 167, ahead of only Somalia and North Korea, in Transparency International's 2015 corruption perception index. Nigeria was at 136.

With his remark, the archbishop was believed to have been referring to Nigeria's President Muhammadu Buhari, who won elections last year promising to fight widespread corruption.

In response, Mr Buhari said his government was deeply "shocked and embarrassed" by the comments.

Speaking through his spokesman, he suggested that Mr Cameron must be referring to Nigeria's past notoriety for corruption before his coming to power last year.

Labour MP Wes Streeting said Mr Cameron had "egg on his face" and for all the PM's rhetoric about tackling corruption, he had failed so far to get all the UK's crown dependencies and overseas territories to sign up to new transparency rules on corporate ownership.

The government will host world and business leaders at the summit on Thursday in London, aiming to "galvanise a global response to tackle corruption". Speaking ahead of the summit, Mr Cameron said: "For too long there has been a taboo about tackling this issue head-on.

"The summit will change that. Together we will push the fight against corruption to the top of the international agenda where it belongs."

Last year Mr Cameron was recorded talking about Yorkshire people "hating each other" - and he was previously caught revealing how the Queen "purred" with pleasure when he told her the Scottish independence referendum result.

Asked whether Mr Cameron had apologised to the Queen over the corruption remarks, his official spokesman said the presidents of Nigeria and Afghanistan had "acknowledged the scale of the corruption challenge they face in their countries".

Pressed on whether the PM knew he was being filmed, Number 10 said: "There were multiple cameras in the room."