The only land convoy evacuating the Canadian city of Fort McMurray has been disrupted due to 60m flames flanking the road, officials say.

Parts of the city in the province of Alberta have been destroyed after a huge wildfire struck earlier this week.

Officials say the fire will double in size in the coming 24 hours.

Residents have been told they must evacuate and some have left by air, with 5,500 flying out on Friday and another 4,000 due to do so on Saturday. 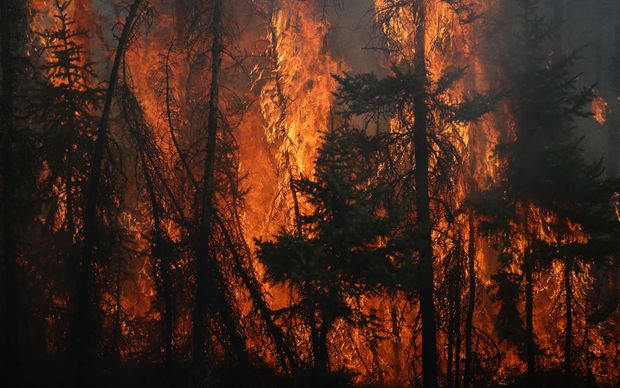 High winds and parched timber and brush from a spring heat wave stoked flames which have engulfed 101,000ha since erupting on Sunday.

Some 88,000 people were forced to flee Fort McMurray and two oil sands sites south of the city were threatened.

Earlier in the week most evacuees headed south by car on Alberta Highway 63 - the only land route out of the area - in a slow-moving exodus that left many temporarily stranded on the roadside as they ran out of petrol. 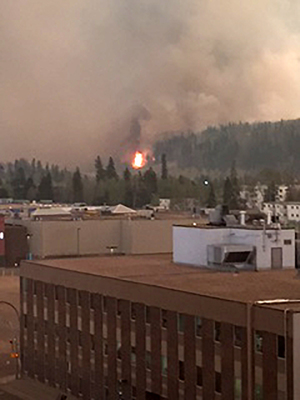 But other residents, who initially fled to oil camps and settlements north of the city, found themselves cut off in overcrowded conditions. They were forced on Friday to retrace their route back through Fort McMurray on Highway 63 as flames continued to spread.

"It reminded us of a war zone," said Marisa Heath, who spent 36 hours in her truck on the side of the highway with her husband, two dogs, a cat and seven kittens. "Eerie. All you could see was cement foundations of houses." 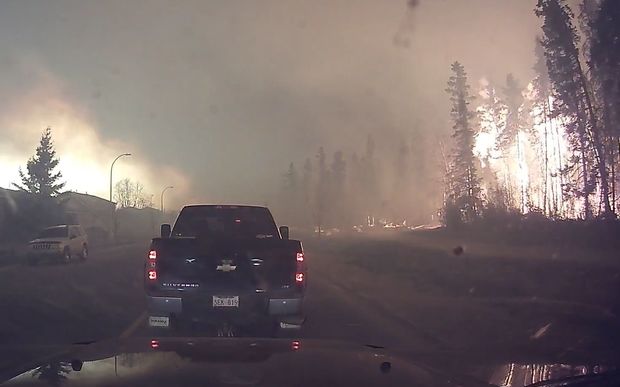 Helicopters hovered overhead watching for flames, and police set up emergency fuel stations along the highway to keep the line of cars moving. They headed toward safety south of Fort McMurray in towns including Lac La Biche, 290km away, and the provincial capital Edmonton, about 430km away.

The convoy was halted briefly around midday due to heavy smoke, but officials said the majority of vehicles had already passed through town by then.

There have been no known casualties from the fire itself, but fatalities were reported earlier this week in at least one car crash among the evacuees. Some 1600 structures have been destroyed in Fort McMurray, authorities said. 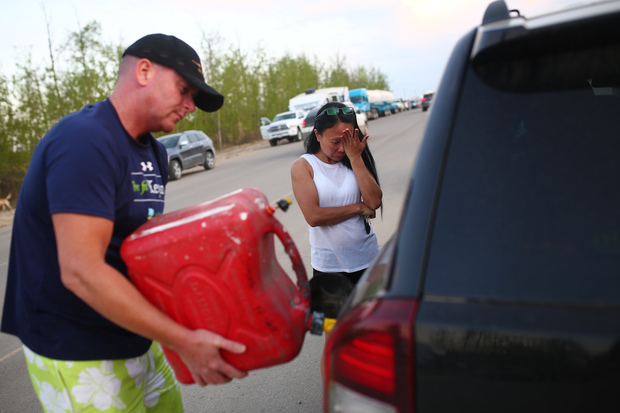 Winds are expected to push the leading edge of the main fire to northeast, and away from town, but parts of the city are still in flames.

Authorities planned to airlift about 8000 of the 25,000 evacuees who were initially chased north of the city.

Cecil Dickason, a Fort McMurray resident who was part of the convoy, said the battered city looked "awful." Others described the city as dark and smoke-filled, pockmarked with charred and abandoned vehicles and roadside spot fires.

Entire neighbourhoods were reduced to ruins, but most evacuees fled without knowing the fate of their own homes. The majority got away with few possessions, some forced to leave pets behind.

Bill Glynn, who took part in the convoy, told the Edmonton Journal newspaper that he travelled through smoke so thick he lost sight of the car in front of him as they crept through the city.

"It was scary," evacuee Sarah Babstock told the newspaper. "We came through with clothes over our mouths so we could breathe."

"The city of Fort McMurray is not safe to return to, and this will be true for a significant period of time," she said, adding that officers of the Royal Canadian Mounted Police would secure and protect what was left of the town.

About a third of Canada's oil production has been shut down by the conflagration, according to a Reuters estimate.

BP Plc's Canadian unit has declared a 'force majeure' resulting in the reduction of available Western Canadian Select crude, among other Canadian grades, according to two trading sources familiar with the matter.