An uncontrolled wildfire is spreading in the Canadian city of Fort McMurray, forcing 60,000 residents to flee for safety.

Alberta is racing to evacuate thousands of people as an uncontrolled wildfire burns near Fort McMurray, in the heart of Canada's oil sands region, forcing residents to flee north to safety.

Alberta appealed for help from other provinces and Ottawa to help fight the fire and airlift people from the city. Local authorities issued a mandatory evacuation order for all of Fort McMurray, which affects the city's 60,000 residents. 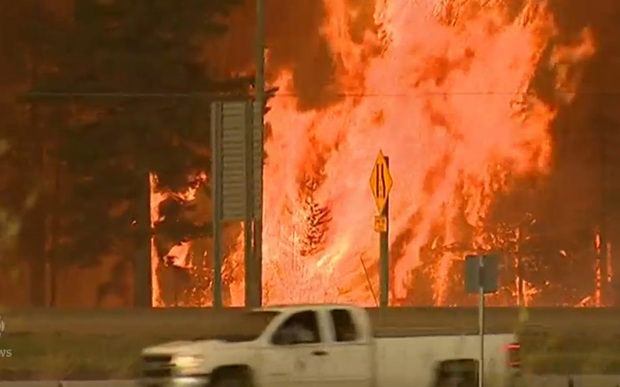 Thousands of people are fleeing Fort McMurray in Canada as a fire threatens the city. Photo: SCREENSHOT/ CBC video

The 2650 hectare fire, which was discovered on 1 May, has closed off the main southern exit from the city, prompting residents to head north towards the oil sands camps.

"This is the biggest evacuation we have seen in the history of the province in terms of fire," Alberta Premier Rachel Notley said at a news conference.

Suncor Energy said evacuees were welcome at its Firebag oil sands facility, while Canadian Natural Resources Ltd said it was working to ensure any affected CNRL workers and their families could use its camps.

Ms Notley said there were no injuries or casualties in the fire, adding that oil sands operations were also unaffected.

A number of flights from Fort McMurray airport were cancelled and the airport advised passengers to check with their airlines for updates.

The blaze, which started southwest of Fort McMurray, spread rapidly on Tuesday to the outskirts of the city, forcing the evacuation of the downtown area and almost every community in the lower town on the banks of the Clearwater and Athabasca rivers. 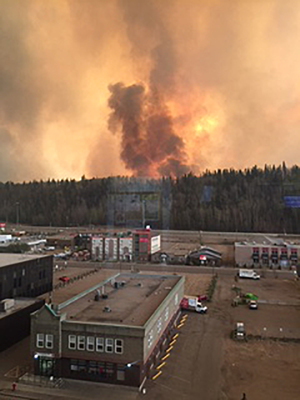 "There's lots of smoke, its quite bad and hanging over the city. Where there are trees in the distance you can see the fire," Fort McMurray resident Nick Sanders said as he was packing up to leave downtown.

Earlier, TV footage and photographs on Twitter showed flames and smoke billowing over the city and traffic heading north on the highway to safety, while CTV News reported a trailer park had been destroyed.

By late afternoon, the fire had blocked off one major route out of town, closing Highway 63 south of downtown.

Some residents were evacuated to Noralta Lodge, an oil sands camp 21 kilometres north of Fort McMurray.

"Tomorrow is expected to be a more intense burning day than today is," said Bruce Mayer, assistant deputy minister of Alberta's Forestry Division.

Mr Mayer said that nine air tankers, more than a dozen helicopters and more than 100 firefighters were battling the fire.

Earlier on Tuesday authorities said the wildfire jumped the Athabasca river and breached Highway 63, the main artery south from the isolated city, which is located around 430 km northeast of Alberta's capital, Edmonton.

After a mild winter with lower-than-average snowfall and a warm spring, Alberta is much drier than normal for this time of year, raising the prospect of a long and expensive wildfire season.

Most oil sands facilities are to the north and east of the city, with the closest being Suncor Energy's base plant roughly 30 km away. A Suncor spokesman said there were no current impacts on operations.

Will Gibson, a spokesman for the Syncrude project, which has its facility around 40 km north of the city, said operations were unaffected.

A spokesman for pipeline company Enbridge Inc, which has crude and condensate pipelines in the region, said the company was monitoring the situation but there were no impacts so far.

This is the second major fire around the city in less than a year. Last May, wildfires in the area led to the evacuation of hundreds of workers from Canada's energy heartland, leading to a 9 percent cut in Alberta's oil sands output at the time.

"It's going to take a long time to rebuild"

Theresa Wells has lived in Fort McMurray for 15 years and said the fire was the unprecedented.

Speaking to Checkpoint with John Campbell Ms Wells said the fire was enormous.

"It has actually entered city limits... so we have infrastructure now that has burned.

"We're going to see some significant damaged in our community and it's going to take a long time to sort of rebuild, but we're also a very resilient community so if there's one thing left standing I'll be heading home."

Ms Wells had evacuated the city with her dog and three cats. She said she had no idea what she would be returning in Fort McMurray.