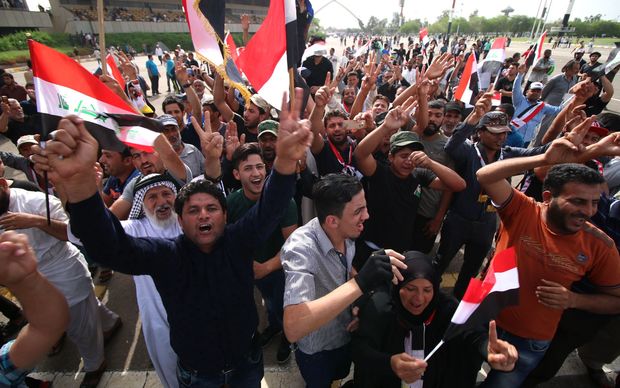 Organisers used loudspeakers to call an end to the sit-in in the Green Zone.

Earlier, Prime Minister Haider al-Abadi ordered the arrest of those who had stormed parliament.

The demonstrators, mostly supporters of Shia cleric Moqtada Sadr, were angered by delays in approving a new cabinet.

The protesters accuse the government of neglecting much-needed reforms, as it struggles with its campaign against the so-called Islamic State group and declining oil revenues.

IS, a Sunni Muslim group that controls parts of western and northern Iraq, claimed a twin suicide bombing on Sunday that killed at least 33 people and wounded more than 50 in the southern town of Samawa.

Supporters of Mr Sadr want MPs to push through plans to replace ministers with political affiliations with non-partisan unelected officials.

Powerful parties in parliament have refused to approve the change for several weeks.

A statement by the protest organisers, quoted by AFP news agency on Sunday evening, cited respect for a Shia pilgrimage as the reason for withdrawing. 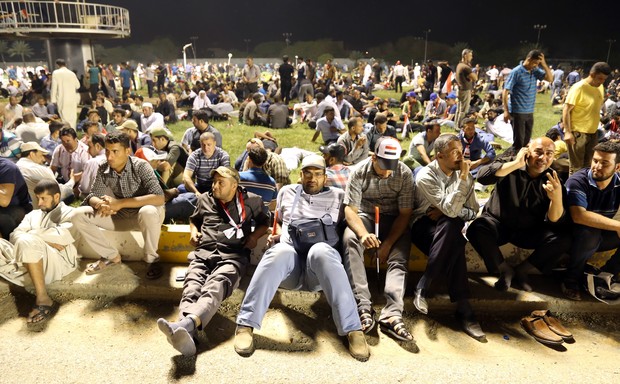 Saturday's occupation of parliament came after MPs again failed to reach a quorum to vote on the cabinet changes.

After the protest, demonstrators set up camp outside the parliament, and many were still there on Sunday.

"We need new faces not the old ones," female protester Shatha Jumaa, a 58-year-old surgeon who described herself as a secularist, told the Associated Press news agency.

She said she wanted the current government dissolved and replaced by a small interim administration whose job would be to amend the constitution and to prepare for an early national election.

Mr Abadi issued his arrest order after touring the Green Zone on Saturday, but there are no indications that any arrests have taken place.

The zone, a highly fortified area 10 sq km in size, is home to key government buildings and foreign embassies.

It is ringed by blast walls, some of which were toppled by the protesters as they breached the zone for the first time in weeks of civil unrest.

Mr Abadi, who came to power in 2014, has promised to stamp out corruption and ease sectarian tensions. 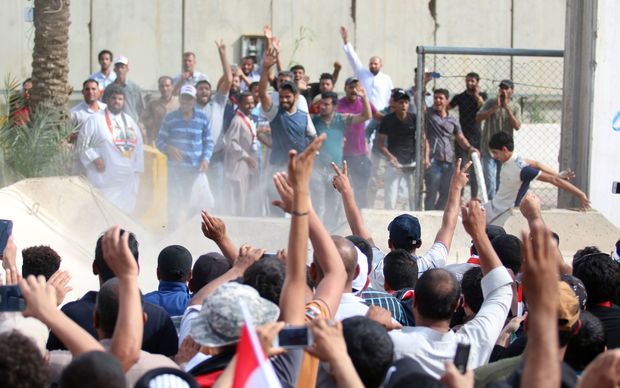 Protesters celebrate as they open a breach in a concrete wall surrounding the parliament after breaking into Baghdad's heavily fortified "Green Zone". Photo: AFP

The government is carefully balanced between party and religious loyalties but the country ranks 161st of 168 on corruption watchdog Transparency International's corruption perceptions index.

Few details were immediately available about the double bombing in Samawa. Police say the blasts came within minutes of each other, the first outside a local government office, the second at a bus station.

IS said it had targeted police in the mainly Shia town, about 240km south-east of the capital.

The country has been riven for years by deadly sectarian violence between the Shia majority and Sunnis.