Leading politicians in the Iraqi capital, Baghdad, have given a gloomy assessment of its prospects for defeating the Isis insurgency.

Fighters from the Islamic State in Iraq and the Levant (Isis) said they seized a border crossing to Syria and two towns in north-west Iraq on Saturday. 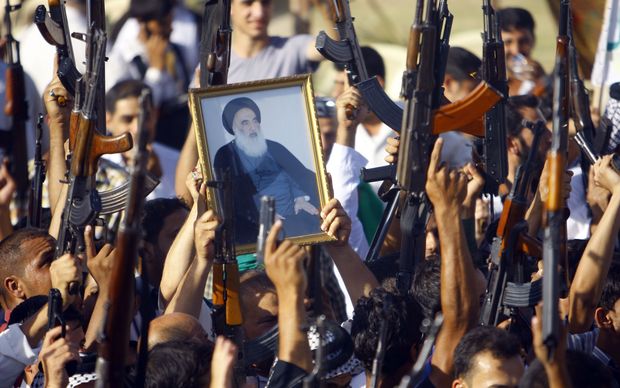 Correspondents say Isis appears to be better trained, better equipped and more experienced than the army.

The Sunni extremists attacked the city of Mosul in June and have since seized large swathes of territory across Iraq.

There is deep pessimism in Baghdad about the way the government's war against Isis is going, said the BBC's World Affairs Editor John Simpson who has been speaking to senior politicians and diplomats in the capital.

The Iraqi air force ran out of American Hellfire missiles two weeks ago, and in any case only has two Cessna planes capable of firing Hellfires, he added.

Experts say Isis has established secure safe havens, including some in neighbouring Syria, which will be difficult to target.

On Saturday, Iraqi officials admitted that Isis had seized a border crossing near the town of Qaim, killing 30 troops after a day-long battle.

Rebels also said they had taken the towns of Rawa and Aneh along the Euphrates river.

Correspondents say a campaign along the river may eventually lead to an assault on Baghdad from the west.

The capture of the Qaim crossing in western Iraq could also help Isis transport weapons and other equipment to different battlefields, analysts say.

Extremist fighters claim to have seized parts of Iraq's largest oil refinery, at Baiji, and have also taken a disused chemical weapons factory in Muthanna, 70km north-west of Baghdad.

The government denied that militants had gained access to parts of the Baiji refinery but said the army was facing "violent attacks" from gunmen.

Also on Saturday, thousands of Shia militia loyal to the powerful cleric Moqtada al-Sadr paraded through the streets of Baghdad.

The cleric, whose Mehdi Army fought the US in Iraq for years, had called for a military parade across the country.

Correspondents say the show of force will be seen as a very disturbing development by the Baghdad government as the parade will only raise sectarian tensions at a time when the government is under pressure to rally the country together against the extremists.